2 min read
Add comment
FacebookTwitterRedditPinterestEmail
The Elder Scrolls Online is promoting the game with a food truck that's out on tour right now. 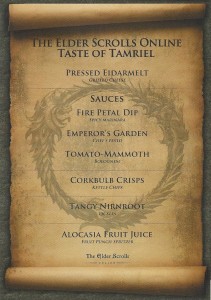 On Friday afternoon I was met with a cool surprise. Just sitting there on campus near my bio lecture was a bunch of canopies, tables, and a truck. A food truck I might add. A food truck totally decked out with art and logo from the upcoming MMORPG, The Elder Scrolls Online. On approach I was handed a “menu” and stood in line for a “Pressed Eidarmelt” (what I was told would be the greatest grilled cheese that I would ever eat).

While in line with other fans and gamers, I was able to get my hands on some giveaways including a keychain, an iPhone decal and some other cool stuff. They were also taking pictures and having chances to win prizes including a custom high powered gaming PC. I also got the chance to sign up as a beta tester (which can be done here) as well as see some of the newer game trailers. It was a fun and relaxed atmosphere.

Those of you who went to PAX East probably know exactly what I’m talking about. The Elder Scrolls Online Food Truck is going on tour around the US and will be headed west after this stop here at UMass.

If you get a chance to meet with the truck at one of its stops, let us know what you get, what you saw, and if that really was the best grilled cheese that you’ve ever had.