3 min read
1 comment
FacebookTwitterRedditPinterestEmail
When we look back upon Tarantino’s career someday Django will stand out as one of his best films, maybe even his best. 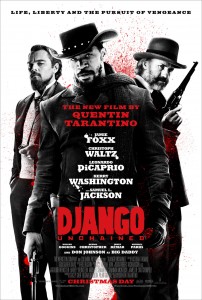 In 2003, I was introduced to Quentin Tarantino through a little film you may know named Kill Bill. I immediately fell in love with his work. I couldn’t believe such a movie existed and I needed more. Over the course of a few weeks I caught up on all his movies and each one seemed better than the last. The dialogue, acting, movie stars, settings, and most importantly the story all worked seamlessly to create compelling works of film. Since 1992 Tarantino has been producing some of the best and most enthralling films I have seen. On Christmas 2012 he released his newest feature film entitled Django Unchained and I have to say it could be his best yet.

Django, played by Jamie Foxx, is a freed slave turned bounty hunter who partners up with Dr. King Schultz, played by Christoph Waltz, who together set out to save Django’s wife from the slaver Calvin Candy. The title to this film is inspired by the 1966 Italian spaghetti western Django staring Franco Nero. For those of you familiar with that movie, you’ll notice Franco Nero makes an appearance in this remake during the Mandingo fight scene. I have always loved how Tarantino pays homage to past films from which he himself was inspired.

From an acting standpoint, I do believe this is some of Leonardo DiCaprio’s best work. His portrayal of a ruthless southern plantation owner is very believable. The real star here though is Christoph Waltz. Watching him in this film is worth the price of admission. His ability to bring a character to life, and most importantly bring emotion from the audience, is unmatched. Whether you hated him in Inglorious Basterds or loved him in Django, you certainly won’t forget him. Speaking of Django, Foxx did a great job portraying this character. I for one am not a big Jamie Foxx fan, but after watching this film I’m much more open to him as an actor. Also starring in this film is Samuel L. Jackson as Stephen, and you will absolutely hate him even though he makes you laugh quite a bit. This is another great performance by Mr. Jackson.

As with most other Tarantino films, Django spares no expense on fake blood. There are moments in this movie that are downright difficult to watch but are a reality. Tarantino did a very good job of portraying the brutality that was slavery in the United States. There is also a great deal of gun shooting and blood splattering throughout this film. One of the things I’ve noticed Tarantino become better at is controlling the flow of dialogue to action and back. Although this movie has a run time of 2 hours and 45 minutes, at no point did I find myself looking at the time or hoping for an ending. The movie flowed nicely and offered action, romance, and comedy.

As I mentioned before, this film deals with slavery in the United States and takes place two years before the civil war. If this type of content or the use of the slang word for negro offends you, I strongly recommend you do not see this film. I think Tarantino really pushed the envelope of what’s acceptable in film but he did it with purpose and it paid off. I think when we look back upon Tarantino’s career someday Django will stand out as one of his best films, maybe even his best. I strongly recommend you see this movie.