Back in 2001 when the original Luigi’s Mansion was released for the Nintendo Game Cube, it generated a bit of a cult following – you either loved it or hated it. It was the first Mario game to feature only Luigi’s name in the title and Luigi’s first and only 3D platformer. Some people loved it because it finally gave Luigi his own spotlight. Others hated it because of its simple, yet unorthodox, game play and lack of traditional Mario elements. But everyone can agree that they wish it had been a much longer game.

Nintendo’s answer to this is a brand new adventure for the green-clad plumber in the Nintendo 3DS sequel, Luigi’s Mansion: Dark Moon (Luigi’s Mansion 2 in Europe). Originally revealed at E3 2011, the game is being developed by Next Level Games (the developers responsible for the Mario Strikers series) and has been given a U.S. release date of March 24, 2013. 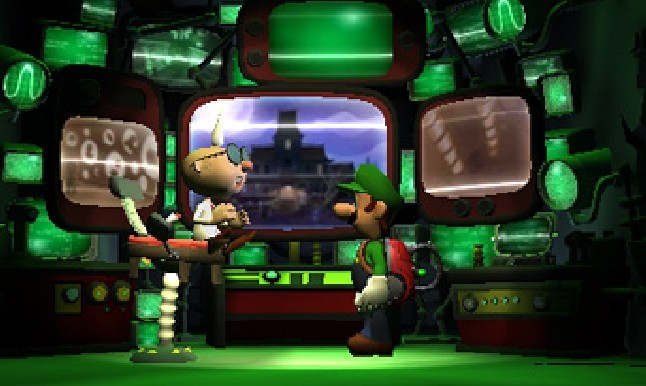 Professor E. Gadd has been researching ghosts in “Evershade Valley”, but when the Dark Moon shatters, the once friendly ghosts turn evil. Armed with the Poltergust 5000 – an upgraded version of the Poltergust 3000, Luigi goes to search for the scattered pieces of the Dark Moon and solve this problem. Unlike the original, this game has been confirmed to contain at least 3 puzzle and mission-filled mansions with many types of ghosts to suck up.

Luigi’s Mansion: Dark Moon will be taking full advantage of the 3D graphics of the system to mimic and build upon the gaming style of its GameCube predecessor. When he’s not battling ghosts, Luigi will be using his wits and his ghost sucking vacuum to find hidden keys to make his way through the mansions. Such puzzles include finding fake doors or curtains that seem to block the hero’s way. Coins and bills also reappear in this game. The game has been said to be more puzzle-based and challenging than the original. The game will also utilize the second screen as a map and keep track of Luigi’s stats.

The game will feature many types of ghosts with various attacks and resistance to Luigi’s weapons. Based on what rooms they appear in, some may need elaborate methods to be defeated  Although there have been hints in the trailers, it is unclear if Boos or King Boo himself is again behind Luigi’s nightmarish adventure. Impressively, Dark Moon will also have many plot driving cut-scenes including rendezvous with Toad and that humorous elevator scene at the end of the trailer.

Just recently announced, Nintendo has confirmed that this Luigi’s Mansion will have multiplayer mode. More developed than Nintendo Land’s minigame “Luigi’s Ghost Mansion”, multiplayer will have both local and online connection of up to 4 players. Four Luigis of different colors work together in ‘Hunter Mode’ to clear levels of ‘The Scare Scraper’ by sucking up all the ghosts that appear on each floor before moving onto the next. Judging from the trailer, it seems that there may be other multiplayer games to come.

This game looks like it will have made great use of its 2 years in development. Luigi’s Mansion fans will love this game and its multiple mansions, new puzzle modes, and of course the multiplayer games. The game looks polished, humorous, and appears to be a real tribute to the Mario universe. And it’s about time that Luigi gets to have another chance to step out of his older brother’s shadow (who doesn’t seem to be making an appearance at all in this game). The game will most likely be available in both physical form and in digital form via the Nintendo eShop. GameStop will soon be taking pre-orders as well.