4 min read
Add comment
FacebookTwitterRedditPinterestEmail
This game kept me on the edge of my seat to the very end. I was begging for more at the end of each chapter.

The Walking Dead is by far one of the greatest all around games I have ever played. Whoa, bold statement for a zombie game, isn’t it? What you need to understand is that The Walking Dead is more than just a “zombie game”.  Telltale Games has done an amazing job of making The Walking Dead universe come to life and allow the player to truly feel involved. Much like the popular TV series, the game focuses more on human interactions than it does killing zombies.

The story line in this game is basic and simple. You play as Lee Everett and you’re charged with the task of protecting a young girl named Clem. What makes this so interesting is that the way you or I go about it could be completely different. Do you treat her like an adult or like a child? Do you lie to her about your past or be up front with her? Should you shelter her from the terrible reality of what’s going on or teach her to confront the world? I found myself trying to do what was right for the young girl so many times but at the cost of upsetting other characters in the game.

Speaking of the characters in this game, all of them are unique and superbly voice acted. Some of these characters live, some die, and some exit the game. I personally played through the game numerous times and each time different characters lived or died based on my decision making. Telltale Games did an amazing job of making decisions mean something. Not all decisions are important, but there are quite a few that will dramatically shift the course of the game. I actually enjoyed talking to all the characters just to learn more about them and their stories. Character interactions are major points in this game so don’t avoid them. 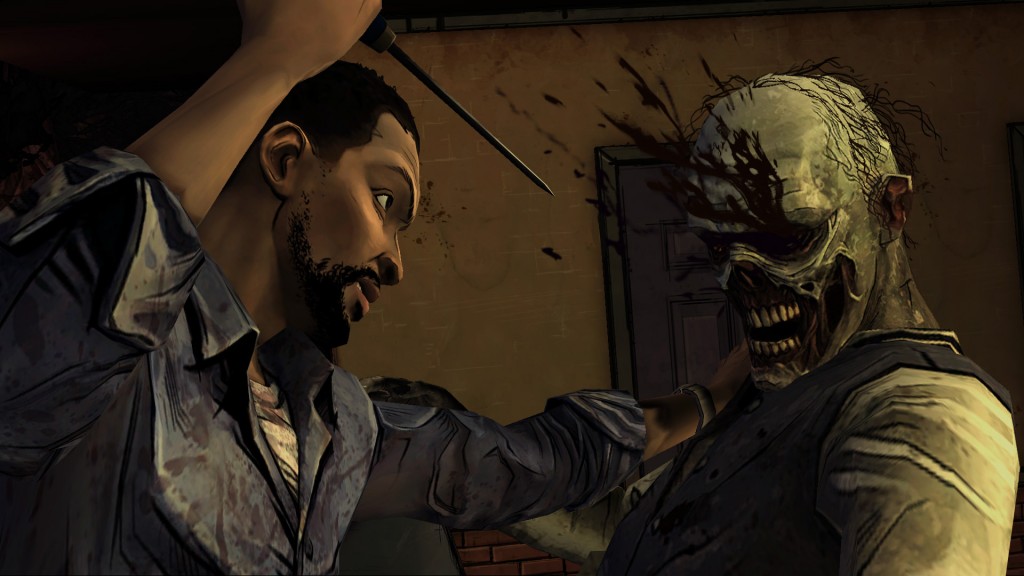 As the game progresses, so does the action, drama, and importance of decision making. What you will also notice is how the world around these characters is drastically altering their ability to function properly. Some characters begin to unravel and lose control as others become more grounded and hell-bent on survival. Sometimes making a decision is not as easy as pressing the X button or the Y button but requires some actual thought. Knowing that every choice could alter the game makes decision making that much more fun and thought provoking. Overall, this game is fantastic from start to finish and takes the point-and-click adventure to new levels.

The style and look of this game can be summed up like this; combine the comic book with the live action television series and you have The Walking Dead game. The art style of this game works. It feels like the pages of a comic book have come to life.

As mentioned before, the voice acting in this game rivals that of Grand Theft Auto. Telltale has also done a superb job of bringing the environments to life through sounds and music.

The controls are easy to figure out and very responsive. At no point does this feel like a traditional point-and-click adventure.

This game kept me on the edge of my seat to the very end. I was begging for more at the end of each chapter. What really makes this game fun is the level of connection that you have with the characters. If you take the time to talk to them you’ll learn about their fears, hopes, dreams, and even about their past. Killing zombies is also a blast. Nothing beats axing a zombie in the skull.

You’ll want to replay this game numerous times just to see how things change and they certainly do.

The game occasionally slows down when there’s too many characters on screen. I also had a problem with saved games not loading correctly or actually being erased once. This is frustrating when you’re 80% through and your file disappears. My only other problem with the game was the final chapter. I felt chapter 5 was rushed and half the length of the others. I also didn’t find it to be the emotional ending I was expecting it to be. I’m not saying it’s no good, but it lacked the emotion I was expecting it to have.