2 min read
Add comment
FacebookTwitterRedditPinterestEmail
Pokemon X and Pokemon Y are planned for a simultaneous release around the world in October of 2013.

Mr. Iawata hosted a short, but very special edition of Nintendo Direct entitled Pokémon Direct in order to share some very big news: Pokémon is making its way to the Nintendo 3DS!

After much success by elongating the already extended life span of the original Nintendo DS with Pokemon Black 2 and White 2 versions, GameFreak and Nintendo have plans to break the mold once again with the new Pokémon X Version and Pokémon Y Version for the Nintendo 3DS. Pokémon X and Y are set in another new world with new towns and obstacles to overcome. The Pokémon Direct teaser shows off three new starter Pokémon as well as two new legendary Pokémon who have been revealed to be named Xerneas and Yveltal. A few classic Pokémon also make an appearance.

Gameplay footage shows that the game will be taking advantage of the 3D screen capabilities and for the first time will be using characters with more real-life proportions (rather than the tiny little sprite in a top-down view) that has only been seen in console games like Pokémon Colosseum. The battle system will also resemble the more realistic style seen in the Pokémon Stadium-esque video games. Battle sprites will be rendered in 3D and the battle will be shown from a 3rd person point of view. Attacks will have more detailed animations and Pokémon will move in response to those attacks – both in attacking motions as well as flinching from pain. 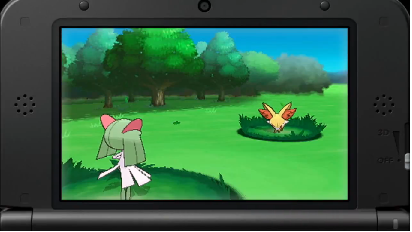 Pokemon X and Pokemon Y are planned for a simultaneous release around the world in October of 2013.