3 min read
1 comment
FacebookTwitterRedditPinterestEmail
A well crafted level of absurdity and self-awareness allow Pitch Perfect to avoid the cheese-pit and rise up as a fun and enjoyable movie. 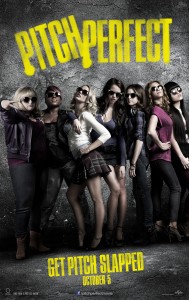 The first thing I want to clarify about Pitch Perfect is that this movie is NOT a musical. Yes, it does feature singing, but in a musical songs are often used in place of conversation and the characters are not aware of the fact that they’re singing. This is not the case in Pitch Perfect. This is a movie that features music, specifically several a cappella groups.

The plot goes a little something like this: Anna Kendrick plays Beca, an outsider-type girl who has some daddy issues because he’s making her attend college instead of pursuing her dream of producing music. He wants her to fit in and make friends, while she just wants to keep her headphones on all day. Meanwhile, there’s a rivalry going on between two a cappella groups… the Bellas and the Treblemakers. The Treblemakers are the top dogs and this year the Bellas are looking to knock them off their throne.

Things look pretty formulaic on paper and to a degree they are, but for something that could have been completely ridiculous, Pitch Perfect‘s greatest success is its self-awareness. It’s a movie about rival a cappella groups that treat themselves with gang mentalities. The Treblemakers somehow manage to pull off being jerky, meathead, frat boys while still being a group of guys who believably love to sing. It’s all pretty ridiculous, but the movie walks a fine line between poking fun at the concept while still holding onto enough seriousness to keep the audience invested instead of allowing them to join in on the bashing. There are a few elements in the movie that feel a bit out of place due to their level of absurdity (like the reason the Bellas lost the competition last year and a super creepy, quiet talker), but even these moments add to the strange, welcoming vibe that runs through it. If not for this internal vein of absurdity, the movie could have come across as cheesy. Fortunately, it just ends up being a lot of fun instead.

Roles that should feel tired and overdone end up feeling fresh due to the performers in them. Anna Kendrick’s Beca embodies a lot of the anti-social, grunge cliches, yet still manages to come across as warm and inviting. Rebel Wilson’s “Fat Amy” could have easily been accused of ripping off Melissa McCarthy’s character in Bridesmaids, but offered just enough of a different spin to keep it unique. Brittany Snow and Anna Camp are your typical dolled up sorority types, but provide a dynamic between the two that makes it work. Lastly, Alexis Knapp plays the voluptuous sex-kitten Stacie, another role that could have been 2-dimensional, but manages to sneak in her own brand of comedy.

And as much as I hate to admit it… I even enjoyed the musical numbers.

Bottom Line: A well crafted level of absurdity and self-awareness allow Pitch Perfect to avoid the cheese-pit and rise up as a fun and enjoyable movie.