2 min read
FacebookTwitterRedditPinterestEmail
PETA has moved on to another video game franchise for some more shameless promotion.

It seems like PETA has recently taken a liking to stirring up a little controversy whenever a new major video game gets released in order to get some publicity. If you remember from last year, PETA created it’s own “scandal” by taking a shot at Mario 3D Land; specifically at Mario’s Tanooki-suit transformation. By making Mario appear as the bad guy for skinning a Tanooki alive and taking its fur, PETA created its own little flash game staring the Tanooki bent on revenge.

This time around, PETA’s new game takes a shot at the Pokémon franchise and was released along with the release of Pokémon Black Version 2  and Pokémon White Version 2. Entitled Pokémon Black and Blue Version, this parody game deals with animal violence and addresses things such as forced animal fighting and the conditions of circus animals.

The game starts you off playing as Ash’s Pikachu, whose been beaten and has a chunk missing from his ear, and you begin battling against your current human owner. After defeating him you begin fighting other trainers and recruiting other battered Pokémon. During play, you find “treasures” which include those upsetting and sickening videos that show poorly treated and abused animals. 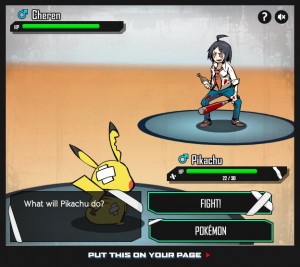 The game does have a humorous aspect to it. The entire game mechanic deals with Pokémon battles. Each Pokémon has two attacks that you would expect (such as Pikachu’s “Thunderbolt” and “Quick Attack”) but they also have 2 special “PETA Attacks” like “Protest”, “Bull Horn”, and “Shame” to name a few. They all reduce stats of the human opponent. Humans have their own unique ways to attack back such as “Whip Lash”, “Perfume Spray”, and “Butcher Knife” to name a few, complete with bloody and violent attack animations. There are also some Pokémon references that many fans would understand.

So, despite the game’s attempts to be humorous, it’s really all about sending PETA’s message via the character’s dialogue and each human’s “realization” that Pokémon are not to be abused. Even as they are walking around, Pikachu and his squad begin talking about leading an uprising against the Humans.

This project by PETA may seem more humorous and not act a secondary attack on video games like the one against Mario was, but one way or another it seems that PETA is still planning to use any means necessary to force its ideas in front of the eyes of the population.

What do you think about these “projects”?