PETA attacks Mario over use of a Tanooki suit

3 min read
Add comment
FacebookTwitterRedditPinterestEmail
PETA has taken some extreme measures with their protests in the past, but their most recent attack makes me wonder if they've finally gone off the deep end.

PETA has taken some extreme measures with their protests in the past, but their most recent attack makes me wonder if they’ve finally gone off the deep end. 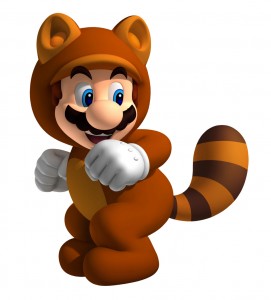 The organization has posted a page titled “Mario Kills Tanooki” along with the following message:

When on a mission to rescue the princess, Mario has been known to use any means necessary to defeat his enemy—even wearing the skin of a raccoon dog to give him special powers. Tanooki may be just a “suit” in Mario games, but in real life, tanuki are raccoon dogs who are skinned alive for their fur. By wearing Tanooki, Mario is sending the message that it’s OK to wear fur.

On the same page, the company went even further by creating a Flash-based game entitled Super Tanooki Skin 2D in which the goal is to reclaim your suit by catching the flying Mario.

In journalistic fairness, I gave the game a shot. It’s fucking disturbing. There’s blood everywhere, even dripping off of Mario. I don’t remember seeing that in any of Nintendo’s games. What’s worse is the message that the hypocritical PETA is sending with the game. It’s constructed so poorly that my Tanooki died a ridiculous amount of times in the couple minutes I wasted on it. To use PETA logic, it’s my belief that the company is implying through their game that it’s OK to let Tanooki die repeatedly for our amusement.

Nintendo has responded to PETA releasing the following statement:

Mario often takes the appearance of certain animals and objects in his games. These have included a frog, a penguin, a balloon and even a metallic version of himself. These lighthearted and whimsical transformations give Mario different abilities and make his games fun to play. The different forms that Mario takes make no statement beyond the games themselves.

I don’t work for Nintendo myself, but I’ve also prepared a statement on their behalf:

Nintendo would like to remind PETA that Mario is a fictional character who exists in a digital world of make-believe. If we are suggesting that through the use of the Tanooki suit Mario is encouraging people in the real world to wear furs, then we must also assume that we are suggesting that wearing such a suit would allow a person to fly and turn themselves into a statue of stone. I think it goes without saying that this is not our intent, as that would imply that we at Nintendo are bat-shit crazy like the people at PETA. Nintendo apologizes for any confusion, but we must now return to constructing our next Mario game in which we throw fireballs at plants and stomp turtles out of their shells.