A Girl Among Geeks, Features, Movies

An Ode to Bad Movies

Recently I was driving with my boyfriend, spending a lazy Sunday running some errands. As we usually do, we were listening to some podcasty goodness along the way. In particular we were enjoying the comedic brilliance of “How Did This Get Made?”, a podcast that mocks bad movies. The episode we were listening to was ripping into 2006’s The Wicker Man, showcasing its horrible acting, unintelligible script, and overall bizarre nature.

While giggling through the episode, my boyfriend and I eventually came to the conclusion that we must watch this movie as soon as possible. Unfortunately, when we hit up the nearest Redbox we had no success. We checked the internet but couldn’t find a free version, and soon after we struck out when Netflix failed to have it on Instant. Reluctantly we admitted defeat, but this momentary obsession made me realize something about myself.

Note that when I say “bad” movies I’m not referring to simple cinematic missteps or films that are part of a genre that I may not enjoy. Rather, I am speaking about those movies that are so terrible that they transcend the confines of a non-award–winning film to reach the magical strata of just plain awful. 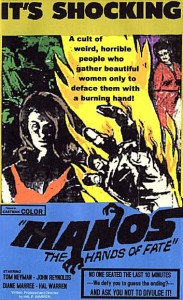 I’m referring to such cinematic abominations as Troll 2, Birdemic, Manos: The Hands of Fate, and The Room; films like Plan 9 From Outer Space and Santa Claus Conquers the Martians, that when viewed by the average Joe will likely not be finished due to its lack of a comprehensible plot and amateur-at-best bad acting. These are the movies that I will ravenously eat up and promptly ask for seconds every time.

Why, though, would a self-proclaimed cinephile that prides herself on her well-developed film palette not only subject herself to, but fully seek out such terrible movies?

In order to break this down a bit, let’s compare a prototypical good movie to my list of borderline unwatchables. Cinematic masterpieces generally contain elements of seamlessly crafted, character-driven plots expertly presented by talented actors at the height of their talent. They have artfully shot scenes that capture both the beauty of the world around us and the power of the tale being crafted to the extent that a viewer could chose to mute the sound and still be able to enjoy the presentation.

My bad movies contain none of the above. In my experience, the scripts are embarrassingly bad, the acting is ham-fisted and over-wrought, the cinematography is elementary at best, and usually the quality of the special effects are laughable. They contain no redeeming elements and by all rights shouldn’t exist.

And yet they were made. This is what makes these terrible movies inherently brilliant. Yes, they are hilarious for all the wrong reasons and therefore are fodder for mockery, but the fact that they are around for us to enjoy gives them value.

Despite the lack of skill and access to the proper tools, these terrible films were not only crafted but distributed and became beloved by the cult film fans that found them. They were true labors of love by all involved, even if only for the short period of time that the key players were a part of them. The directors were working with the limited resources that they had, the actors were pushing just beyond their talent range, and the crew members were laboring for little pay to help create the often misguided yet nonetheless present visions. Right, wrong, or indifferent these movies exist, so why not celebrate them?

In essence, bad movies showcase the best elements of human nature even while serving as examples of the worst of cinema. Although they ultimately are failures, these films are still earnest efforts by their creators to make a work of art. The director, actors, crewmembers, and producers of these horrifically bad movies haven’t just created fodder for us to mock; they have developed a means of showing how people can join together to labor towards a common goal, and how noble that effort can be regardless of the outcome.

Sure we poke fun at bad movies, but ultimately there is something deeper to them that I think the average fan senses on some level. A piece of costume jewelry may be cheap, but through the right eyes it’s a brilliant accessory that makes an outfit pop. That’s what bad movies are to me: they’re the unpolished gems that lighten up my days and bring a smile to my face. For that reason they will always be something that I seek out, relish, and yes… enjoy.

A Girl Among Geeks Birdemic Manos: The Hands of Fate Plan 9 From Outer Space Santa Claus Conquers the Martians The Room The Wicker Man Troll 2