4 min read
9 comments
FacebookTwitterRedditPinterestEmail
I tried watching Ultimate Spider-Man. I wanted to like it, but I couldn't. This is why.

After seeing footage of the Ultimate Spider-Man cartoon at last year’s NYCC and hearing the creative team behind it, I was very excited to see how it would turn out. However, after watching a few episodes of the show I found myself completely disappointed. I could probably name any number of gags that I had specific issues with, but here’s 5 solid reasons why I’ve abandoned the show and won’t be returning: 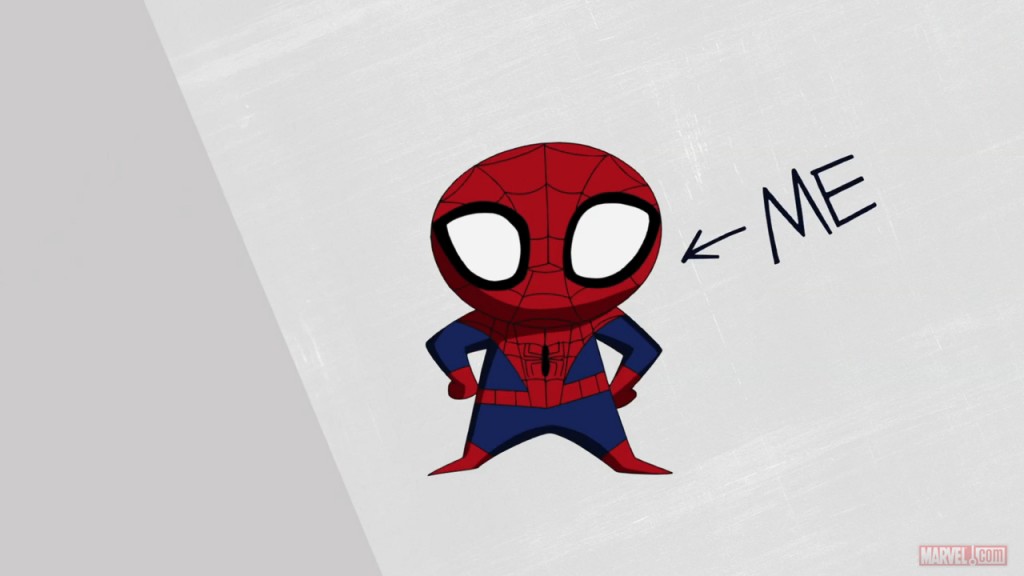 I can only assume the quick cuts, pacing, and constant assaults on my senses are the result of an overstimulated youth. Taking a nod from childish anime (and not in a good way), Ultimate Spider-Man is an anxiety-inducing cavalcade of confusion. If this had been on TV during the Saturday morning cartoon-era of my youth, I may have grown up developing abnormal heart palpitations. 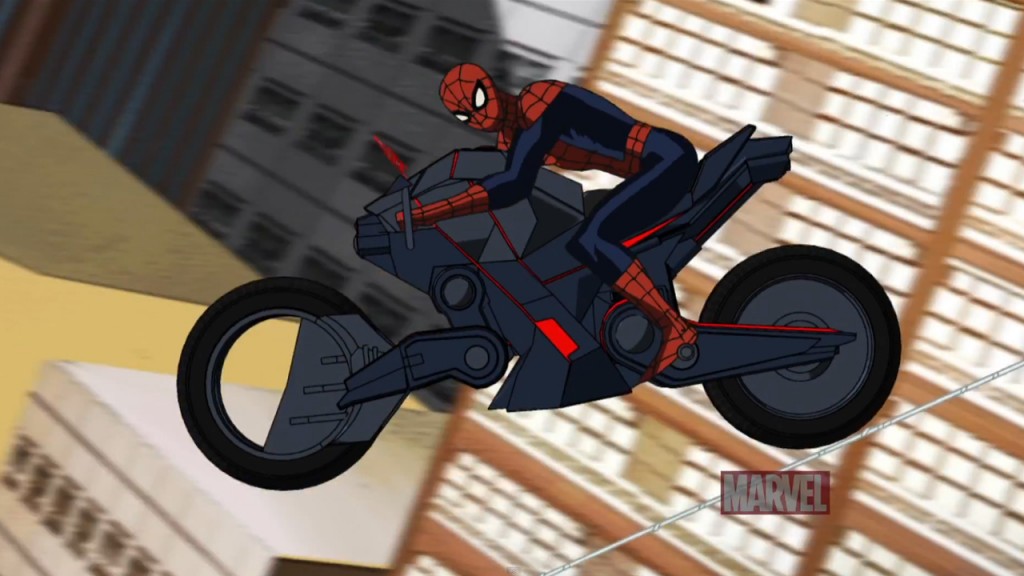 For what reason does Spider-Man need a motorcycle that shoots webs aside from toy sales? I’m not sure, but if that’s the precedent we’re setting, Superman needs a jet and The Flash needs a NASCAR racer. Why use superpowers when you can get a vehicle that mimics the thing that makes you special? If I wanted specialized vehicles I’d load up a copy of M.A.S.K. Batman’s one of the few superheroes who gets to play around in the cool vehicle department, not Spider-Man. 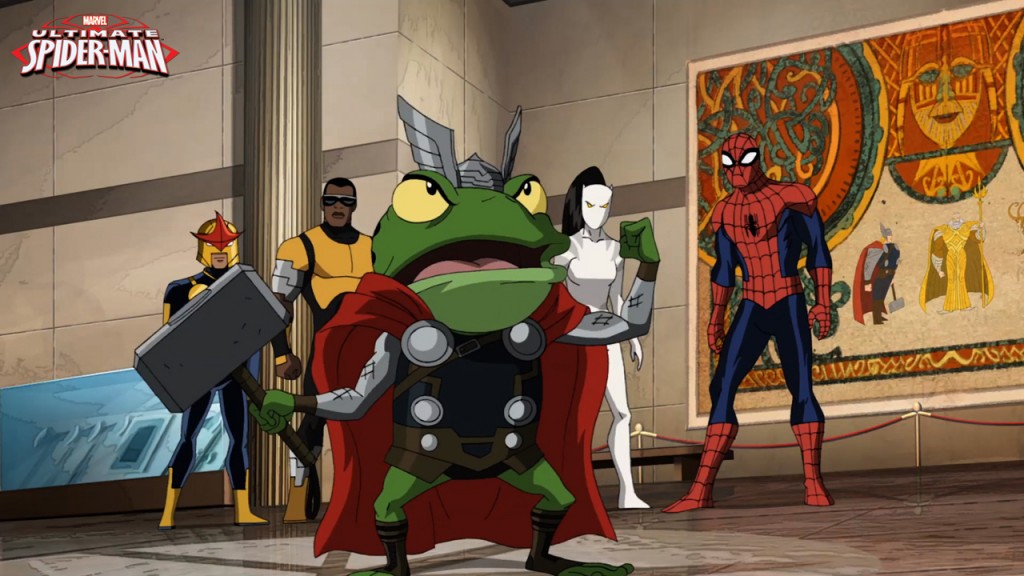 One good thing Ultimate Spider-Man attempts to do is bring in lots of characters from the Marvel universe. Unfortunately, just about every time one of them shows up, they’re part of something foolish. Taskmaster disguises himself as a gym teacher during one episode to infiltrate Peter’s high school and find out the true identity of Spider-Man. Not only is his disguise stupid and stereotypical, but in one scene he appears to be doing calisthenics in the background for no good reason while the other kids are chatting. When Wolverine appears, they throw him and Spidey into a horrible Freaky Friday parody. Thor shows up in another episode, only to be turned into a frog for the majority of it. Yes… a frog.

4) Pandering to the audience and horrible cutaways 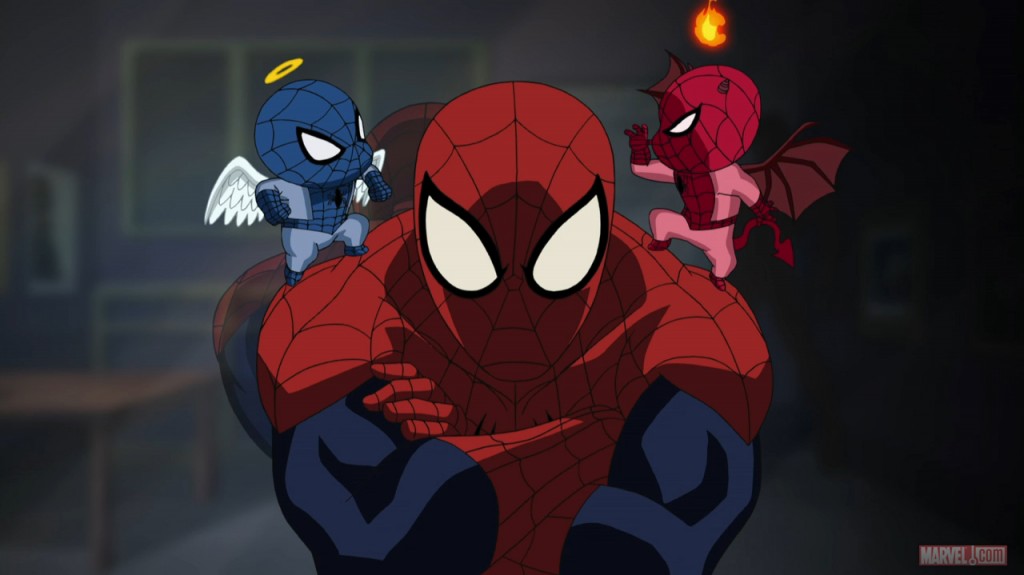 When Deadpool does it in the comics, it’s funny and refreshing. When Spider-Man does it in Ultimate Spider-Man, it comes across as holding the audience’s hand… and it happens every 30 seconds. Let’s dial it back Marvel. All the constant freezing is doing is slowing down the story progression. Ferris Bueller, Parker Lewis, and Zack Morris would all prefer it if you left the fourth wall breaking tricks to the experts. And just because Family Guy is popular doesn’t mean that type of cutaway humor is going to work everywhere else. I don’t need scenes of Spider-Man dressed as a maid cleaning up after a fat Taskmaster in the middle of my superhero shows.

NOTE: There are fans who are editing the show, removing the cutaway scenes, and releasing them to the public. I’ve watched a couple, and they prove the point that the cutaways add nothing. 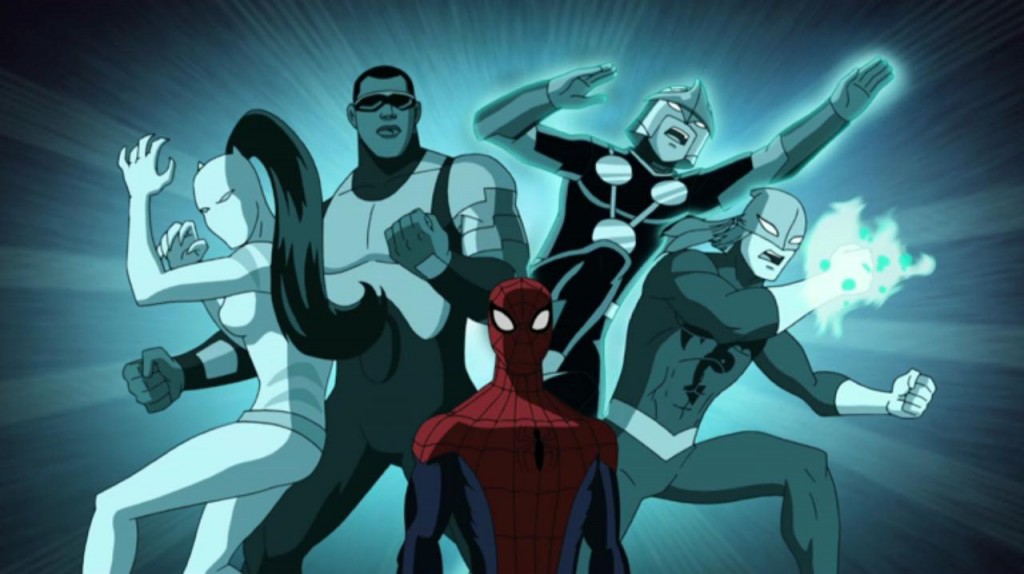 For some reason Spider-Man alone wasn’t enough this time around. Instead of enjoying the adventures of someone whose character is almost always on his own, Marvel decided to team him up with a bunch of equally obnoxious heroes. Even more, Spidey is leading the team under the employment of S.H.I.E.L.D. A lot of the danger from being a vigilante fades away when you give your hero the security net of a technological super spy organization. If I want to watch a team show, I’ll watch the Avengers cartoon. Let’s leave Spider-Man on his own.

And to think, they canceled The Spectacular Spider-Man while this crapfest is getting a second season. For shame.