The lighthearted, whimsical nature of the LEGO series of games has always intrigued me. The core gameplay doesn’t really vary from franchise to franchise (Star Wars, Indiana Jones, Harry Potter, etc.), yet any of theses games makes you WANT to see the game through, given the massive amount of collectibles and unlockable items throughout. LEGO Batman 2: DC Super Heroes, the latest entry into the LEGO-themed arena of interactive games, does some great innovating with a tried and true formula, and also sets the bar as one of the best “Superman” games ever released. Strange you say? Read on and see why, Dark Knights. 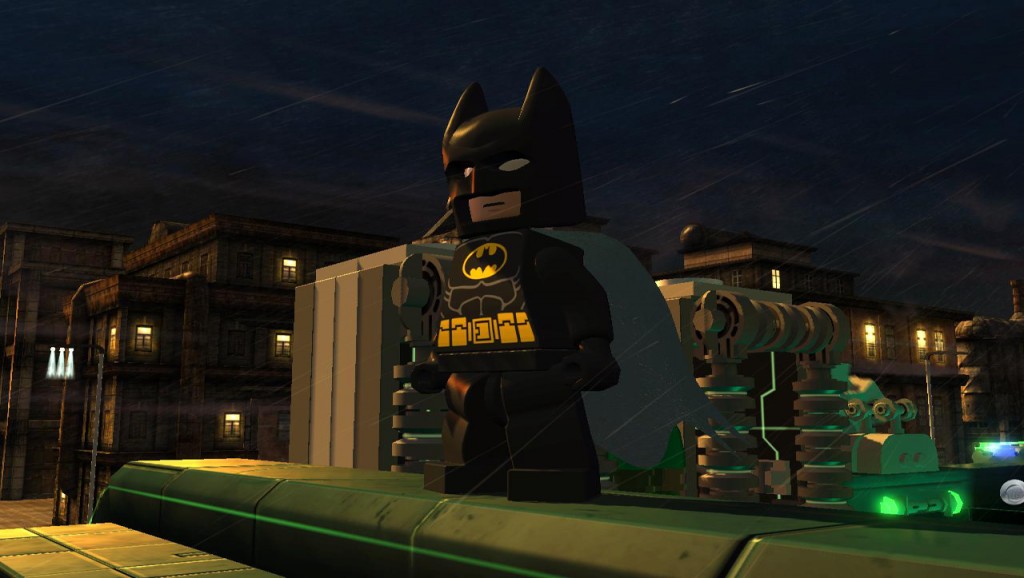 Presentation/Story: LEGO Batman 2 has taken the LEGO interactive franchises to new heights with the following bold and exuberant innovations: at long last, the characters are provided with voices, a first for LEGO games. Second, this is the first time that players can experience a truly open world LEGO game that you can do anything in: fly, drive, or dive using nautical conveyances and such. Think of it as “Grand Theft Gotham,” only with much more added. Lastly, we get a superhero-themed LEGO game with almost all the major players in the Justice League, and a huge rogues gallery of unlockable villains and other characters (Lois Lane?!). LEGO Batman 2 is by far, the most expansive Lego game to date.

Sadly, a few things Travelers Tales could have remedied that were lacking and/or missing from previous LEGO games are still apparent. The menus are the same basic new/load/option choices with nothing else really added for effect or to differentiate it from previous titles. The in-game menus are fairly obnoxious as well. For example, instead of having a single button for the mini map (this is an open, sandbox game world mind you) you have to enter the pause menu or find a batcomputer on the map to access the world map. Couldn’t this have been accomplished with the select button or trigger button? The manual itself included with the game lacks a good amount of information as well, especially with so many new icons on the world map. We’ll delve deeper into more shortcomings in the gameplay section.

The story is comical, at best, but you shouldn’t expect much seriousness in the first place from a LEGO game. Lex Luthor and the Joker team up. Lex is running for president with the Joker’s behind-the-scenes help, and it’s up to Batman and Robin (and Superman) to stop him using Batman’s technology, wits, and tricked out batsuits. Superman lends his strength to the clash, and there may even be a little help from the Justice League!

Gameplay: If you are a gamer, and you have played any of the previous installments of any of the LEGO games, the core gameplay is still there. Levels include all standard pickups: superhero stud bar, mini kits, red bricks, gold bricks, etc. An addition is the “citizen in peril” which is a trapped Gothamite who requires a little thinking to free from their dastardly fate (and usually, a character’s special ability). The biggest addition as mentioned is the open world Gotham City, spectacularly rendered LEGO brick for LEGO brick, and the players ability to traverse it by any means. Superman and Green Lantern can fly it, as can the Batwing. Robin can jump on his motorcycle, or use the Batpod. The Joker has an unlockable speedboat, as well as Batman being able to use his Batsub and Batboat. Overall, there is no shortage of customization on how you travel. There is even the “Bat-Whirlybird” a one man seated helicopter.

Across the world, there are multiple unlockables, and this is the real meat of the game. The story missions can be plowed through in eight hours, and one can go back to discover the mini kits and saveable citizens. You will need to unlock the depth and breadth of all characters in the game to achieve this as well. Red bricks, citizens in peril, gold bricks, and fights with villains all occur in Gotham. Beams of light where bat computers are located unlock the shadowed map, and usually, unlock a villain for you to challenge. Fight the villain, then buy the villain if you have the studs. And boy, are there a lot, I count 50+ unlockable characters and vehicles, a huge amount for any game. Tack on the 250 gold bricks and 20 red cheat bricks, and you can spend some time with this one, if you so desire. The replayability is definitely there for those who want the most out of their gaming dollar.

Now all this stuff sounds great, but there are some aspects of the game that I find abhorrent, and easily fixable if given the time. First, the flying and camera angles while flying are touchy and off-base. Superman, for example, as a playable character, is very difficult to land correctly and control while flying. The wild camera does not help. And I don’t know about you but I am sure Batman would be pissed if he flew his Batwing in between buildings and it got stuck there, thus forcing the player abandon their conveyance and continue on foot. In a nutshell, the camera for flying heroes leaves much to be desired. The in game menus are another issue. As mentioned, tracking items and setting custom markers on the map is a chore. Not only is the HUD compass difficult to follow, especially when cluttered with markers, but trying to find your custom markers is obnoxious, especially when you are right in the vicinity of what you are supposed to be looking for. Thankfully, the only saving grace is tapping the triangle button sends out “sonar” that reveals hidden items on the map, so you can set your custom marker. Still, following it is difficult, and a one button mini-map approach would have sufficed. Story missions are easily accessed on the map, thankfully, and can be found with the ONLY easy to follow marker on the map, the giant yellow Bat Signal.

Graphics: Pretty standard LEGO fare. The only addition is the open-world Gotham, which looks great and is well detailed. From Wayne Tower, to Gotham Cathedral, it’s a sight to behold. The story mission locales are pretty standard, and building LEGO items can be done twice as fast and look twice as good when Superman does them. Cutscenes in the game had me smiling, and looked really good as well. The tension and animosity between Batman and Superman that we see in the comics of old is there, and played out really well. Plus, there is some great homage to many incarnations of Batman from the past, including the 60’s. 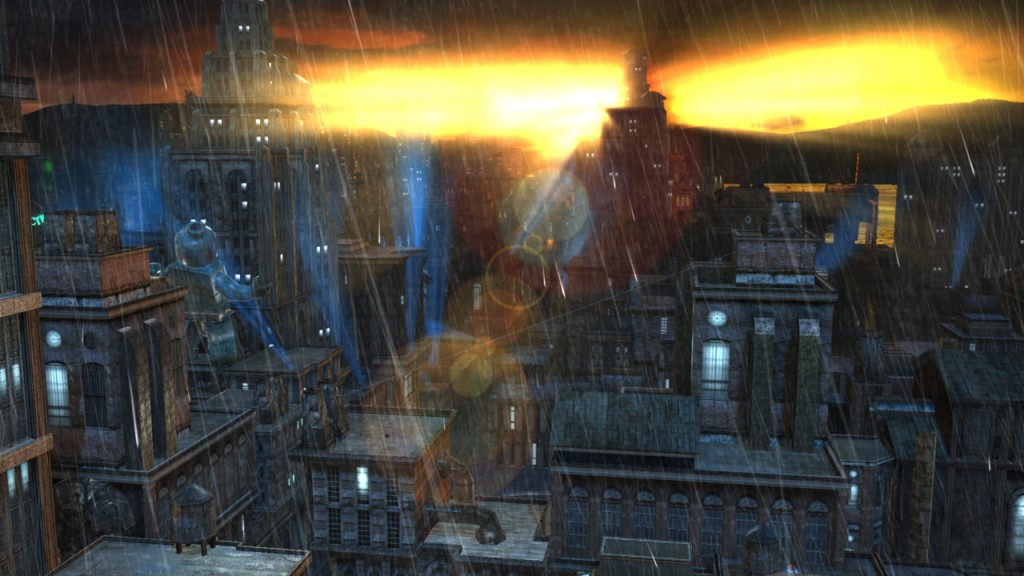 Sound: By far, the sound is the standout hit of the game. Danny Elfman’s 1989 Batman film theme, John Williams’ 1978 Superman film theme, playing while you are running around in Dolby Digital. It is one of the few good things I can say about Warner owning DC… the fans benefit by having Batman tear through Gotham in the Batmobile with Elfman’s theme roaring, and when Superman takes flight, the Williams theme that everyone loves kicks in and makes you feel like Superman. Superb.

Overall: LEGO Batman 2 is one of those games I’m torn on. The elements that make it an awesome piece of work are there, while on the flip side, the elements that could have been worked out and fixed are there as well, and they really detract from the game play experience overall. That being said, this is the best outing for a LEGO game yet, with the most innovation. And, as I said, after years of bad interactive Superman games, this is the best “Superman” game to date. The gripes of bad camera, mini map, and short main story mission length (again if you are hardcore, balls deep in games like me, a little over 8 hours) are balanced by the amount of characters, unlockables, and open-world Gotham. The only thing that would make me happier in the future is seeing a Marvel heroes LEGO game that includes an open New York city, Spider-Man, and the Hypno-Hustler 🙂