When was the last time you REALLY had to work for something? Telltale Games delivers Robert Kirkman’s saga of survival to game consoles in an episodic adventure series sure to please adventure aficionados both young and old.

Let’s face facts: Zombies are everywhere. The craze of the undead has been translated into cinema, comics, television, and board game experiences. The Resident Evil series. Dawn of the Dead. Zpocalypse. And of course, The Walking Dead. Now, gamers can enjoy The Walking Dead comic universe on their gaming console of choice and live out the story in a monthly, episodic format that is sure to entice gamers with both a competitive price point and gameplay that will surely make you hearken back to the classic adventure games of yore.

Story/Presentation: You are Lee Everett, ex-college professor accused of murdering your wife’s lover in a crime of passion. On your way to jail, all hell breaks loose across the southern United States and you are smack dab in the middle of the chaos. Without detailing too many of the plot points and characters you meet along the way, let’s just say the story The Walking Dead is telling in the interactive medium is filled with the same emotion and humanistic drama that we see in both the comic book series and the television show. People live. People die. Hard choices must be executed quickly. YOU are that decision maker across the five episodes that will be released monthly. The choices you make in the game will reflect upon the player and how other characters in the game receive you. Not innovative, but it definitely opens up the gameplay experience a little and gives players multiple paths and choices along the way, adding to the replay value.

Presentation is pretty basic for a downloadable game. Menus are sparse and simplistic, with a very simple GUI for options. The one cool aspect about the game’s presentation is that the choices made are calculated in game, and you can see how you rate against other players across the world who have played, as you are ranked at the end of the game on your choices. This is definitely cool, and I already want to go back and play the game again to see what other choices can be made and how they would impact the story and how it plays out. 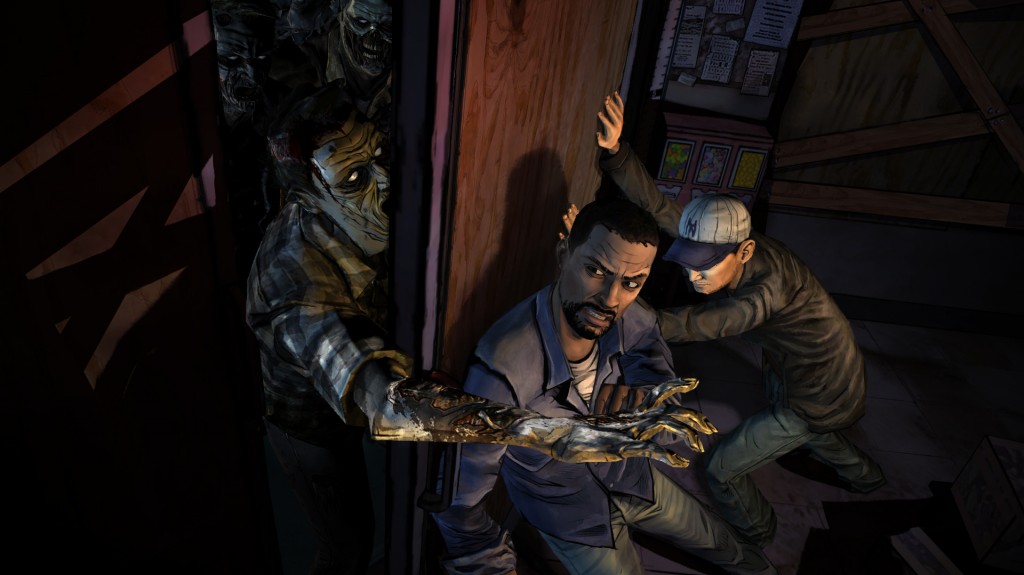 Gameplay: Individuals who remember classic adventure games of old such as King’s Quest, Quest for Glory and all those other classic Sierra titles from long ago will find themselves right at home in The Walking Dead universe. Playing on the PS3, the left stick is for movement, the right stick for targeting, and the face buttons for actions. Interaction with the world involves a combination of all these elements, including picking up necessary items and weapons  for advancement, character conversations where you can choose which responses you deem the most appropriate depending on your playing style, and looking around the environment. The control execution is simple and easy to get used to. Puzzles are fairly intuitive and simple to figure out as you play through the seven chapters in the first episode. I managed to complete the first play through in about three hours. Perhaps the best aspect, as mentioned, is the choices players make reflecting how they are perceived by other characters, and I assume, have a lasting impact when future episodes are downloaded as they become available. A good summation of the gameplay? Classic adventure point-and-click.

Graphics: The character models in the game look great, especially the facial expressions, and have a really cool “comic” look that captures the art style of both Tony Moore and Charlie Adlard, who worked and work on the comics. I remember the detail on a fireman’s axe I picked up that looked like something straight out of a comic panel. The clothing of the characters and the zombies, however, leave a little bit to be desired in terms of graphics. It was very difficult to make out the details on the uniforms of certain individuals, and the zombie character models weren’t varied enough in my opinion. I understand this is a downloadable title, and it is episodic, but I hope some graphical improvement can be made for future episodes.

Sound Design: The sounds and effects for the game were great, except for one thing: where the hell was the dolby digital/dts support!? I don’t understand why this was not included in the game, as it is almost the standard for most video games across the board these days. I was sorely disappointed when I went into the options menu and saw no way to turn on any digital sound. Settling for pro logic is sad, especially for a game like this where sound plays such an important part of the suspense the player feels in certain situations. Again, here’s hoping we see some digital support in the future. 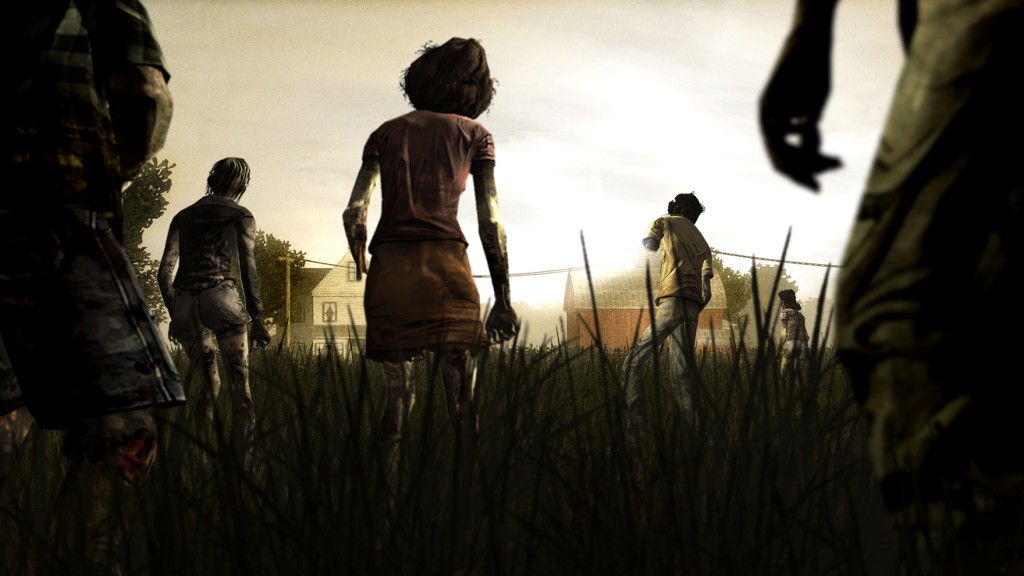 Overall: For the initial three hours The Walking Dead lasted, it was an enjoyable adventure experience, and I can’t remember the last time I played a classically styled  adventure game. Given it’s episodic nature, I am looking forward to future episodes, provided the few improvements on graphics and sound I mentioned are implemented into the game. The story, the emotion, characters, and the choices all made me feel that this can be enjoyed by both the comic series fan and the television show fans, creating a happy medium in the center. With familiar faces from the comic in the game, it’s hard to tell where exactly this takes place, so I am going to assume since the universe of the franchise is so large, other survivors must exist outside of Rick Grimes and crew. Overall, The Walking Dead: Episode 1 is off on the correct zombie killing, survival of the fittest path, and with the popularity of zombies at its apex right now, Telltale has struck while the iron is hot and captured the comic universe of The Walking Dead in a noose and brought it to the masses on what will be a monthly basis. Looking forward to next month’s Episode 2: Starved for Help.

+ choice system allows for another playthrough

The Walking Dead – Episode 1: A New Day is available for PC, Mac devices, PS3, XBOX 360. Pricing on the PS3 is $4.99 per episode or a season pass can be purchased for $19.99 which includes all future episodes. XBOX 360 players can get each episode for 400 MS points, but no season pass is available as far as I can tell.