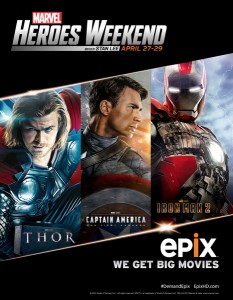 EPIX, the multiplatform premium entertainment service, will present Marvel Heroes Weekend, April 27 – 29, a marathon of superhero movies including Iron Man 2, Thor, the world television premiere of Captain America: The First Avenger and the EPIX Original Documentary With Great Power: The Stan Lee Story. Hosted by legendary comic book creator Stan Lee, the marathon also includes EPIX Extra: Mighty Movie Superheroes, examining the origins and fan following of the mighty team. The weekend celebration of Marvel’s famed superheroes and their creator features the movies that have led up to the highly anticipated theatrical release of The Avengers on May 4.

The EPIX Original Documentary With Great Power: The Stan Lee Story follows the life and creations of Stan Lee, the co-creator of Spider-Man, Captain America, Hulk, X-Men, Fantastic Four, Iron Man and over 200 other characters that can be found in Marvel comic books, on movie screens and in retail stores around the world.

Marvel Heroes Weekend is part of a free preview of EPIX for all subscribers of affiliate partners, which will also showcase Hollywood blockbusters Transformers: Dark of the Moon, Rango, Conan the Barbarian, True Grit, The Lincoln Lawyer and more, along with EPIX original comedy and music events Lewis Black: In God We Rust, Kevin Smith: Burn in Hell and Amnesty International’s Secret Policeman’s Ball. Over 30 million homes nationwide will have access to the free preview, including over 150 titles available On Demand and more than 3000 movie titles available online at EpixHD.com and through EPIX apps.