6 min read
Add comment
FacebookTwitterRedditPinterestEmail
The heralded return of mob hitman and Don, Jackie Estacado, has him fighting for his life, his family, and his sanity in an early, welcome surprise for gaming in 2012.

The Darkness 2 returns gamers to the hellish, brutal, violent world of the villainous anti-hero Jackie Estacado, whose personal war to keep the supernatural force of the Darkness in check even as it attempts to consume him. Believe me when I say, this is a first person shooter that will shred any preconceived notions you might have of the “typical” shooters such as Battlefield and the always vile Call of Duty franchise. It is a nuanced, artistic, story-driven first person shooter that appeals to all the sensibilities of good gaming: superb mechanics, excellent narrative, essential characterization, and even good comic stories. Even if you didn’t play the first one, read on and learn, or the Darkness of poor games may consume you… 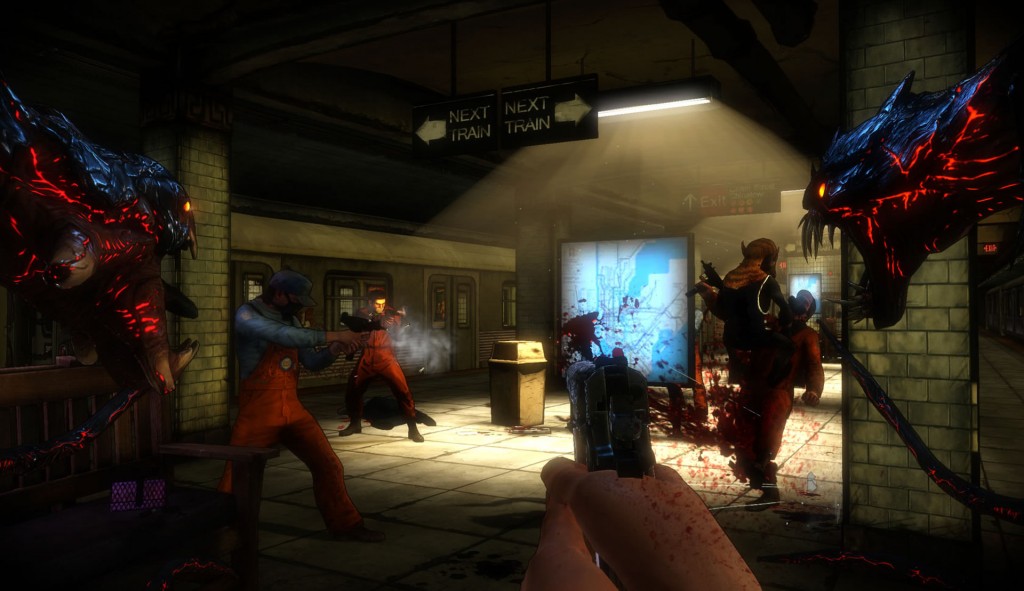 Story/Presentation: The game’s story, written by well-versed comic scribe Paul Jenkins, finds the protagonist Jackie in a heap of shit right from the get go. He is attacked while eating dinner by armed thugs, and, after keeping it inside for so long, is goaded into once again releasing the demonic force of the Darkness. Without giving away too much of the plot, know that Jackie must fight his attackers and struggle with his mind to get to the truth of who is after him, and believe me, the twist ending will surprise you. This is how an adult-oriented story of this type should be executed, and 2K Games nails it.

The interface presentation is pretty standard, with nothing spectacular or eye-catching upon start up. The in-game menus and upgrade screen for powers was cool, albeit a bit hard to make out due to the color and tones of the screen itself. Pretty standard stuff for presentation. It gets the job done though.

Gameplay: The Darkness 2 is, for all intents and purposes, a thinking man’s first person shooter. The game requires use of all four trigger buttons to create a strategy and execute attacks. Choices for combat include single or dual gun-wielding for small arms, and single wielding for larger weapons such as shotguns and machine guns/rifles. The weapon variety is pretty nice to boot. In addition to typical guns, the Demon Arms enable players to slash and pick up enemies and parts of the environment for attacks and brutal executions. Using all your weapons is essential for taking out one of the major enemies of the Darkness: sources of light. Demon Arms are crippled if you don’t carefully shoot and take out any lights in the surrounding area, and puts the player at a disadvantage. This makes for a great element of strategy that must be factored in when playing the game. 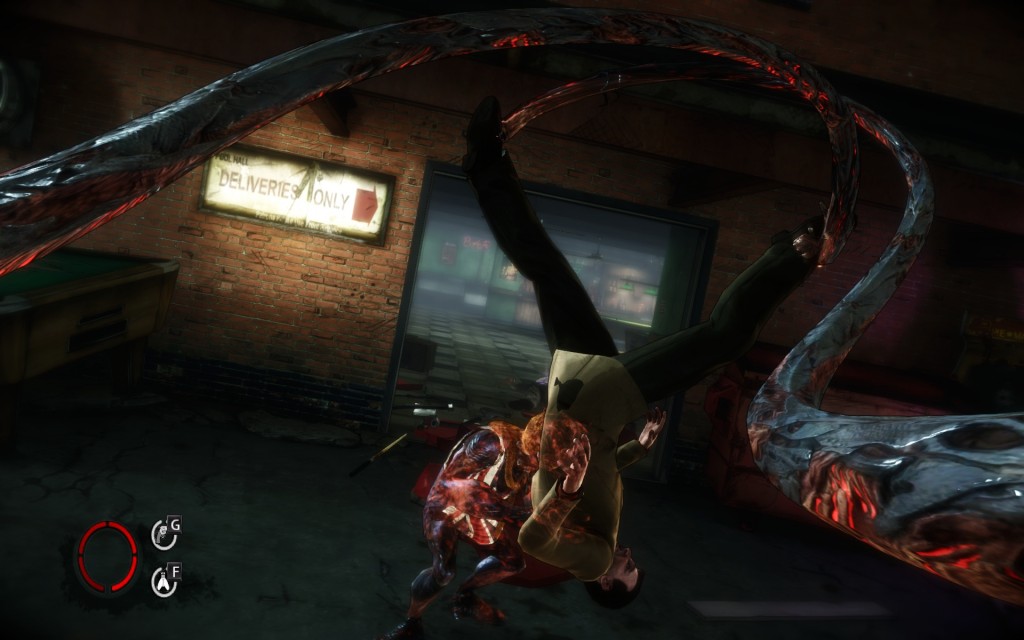 When I say nuanced gameplay, I mean it. Players can choose types of executions that can create health, ammo, and shields. Dark essence generated from kills can be used to upgrade just about everything in the game, and enables you to customize your experience. If you want to focus on running and gunning, you can upgrade your guns and capacity. If you want to play with more darkness related powers, you can upgrade the kill abilities for your demon arms, making them more powerful. You can even upgrade your “darkling” companion who will assist you from time to time in killing your enemies. It is really refreshing to see all this in the game, as opposed to just running around and picking up a weapon and shooting it. The reality is, you will need to utilize all your powers and weapons to get through the Hitman default difficulty. While the game is a bit short, there are some extreme challenges, but they are not unconquerable. Dying is rewarding, as it will require you to use strategy in  your attacks when the game reloads in order to beat certain parts. Boss battles are challenging affairs as well, and not just thrown in for the sake of having a boss battle. The game’s ability to convey a great story, really get inside Jackie’s head, and deal with the emotional aspect of fighting his inner demons and the Darkness shows gamers that first person shooters don’t need cobbled together, ramrodded down your throat multiplayer components to make a great shooter.

Graphics: The art style for the game attempts to mimic a moving comic with cel-shaded graphics and characters, similar to Borderlands. The character art and design is decent, and the background and environments are detailed (and destructible). The only downfall to the graphics, and this could be an engine limitation, is the slowdown that occurs toward the end of the game, especially when there are many enemies on screen. As always with some game engines, clipping and textures become problematic at times. Enemies disappear into walls or fall through surfaces. This is indicative of a game that needs a little extra polish in the graphics department.

Sound: Digital 5.1. Loud. Angry. Driven. All these describe the sound design, and the soundtrack is a fantastic mix of licensed music from various artists from different time periods (I even heard a few 90’s tracks like Self-Esteem by The Offspring). Brian Bloom as Jackie and Mike Patton of Faith No More as the Darkness are a great combination, and both well characterized.

Multiplayer: The Darkness 2 offers co-op multiplayer which can also be played solo, offline. The “Vendettas” campaign allows you to pick one of four characters infused with the darkness and play a campaign that fleshes out the story and mirrors the game’s main campaign (it is a separate campaign, so more gameplay). It includes separate, upgradeable abilities, so that means four characters, four unique power sets and weapons, and four separate upgrade lists. Add in the single mission “hit lists” and the multiplayer increases the games longevity ten fold, an added bonus to an already awesome story.

Verdict: The Darkness 2 is probably going to be another sleeper hit, which is sad. It really is a great game, albeit short in length ( I finished the story in 8-1o hours). It requires strategy and thought, not just run in and gun down your foes gameplay. The story is focused and well told, and makes the player feel the struggles of Jackie, both internal and external. It wraps with an ending I didn’t see coming. With winter being a dead season for games and gaming in general, this is definitely a week plus time killer if you want to get through the campaign, vendettas, and hit lists. If you really wanna go all in, you can even play New Game+ which has you start the campaign again with all your upgrades you earned in the last play through. So put down the other shooters and embrace the Darkness for a fresh, intelligent first person shooter experience.

+Mike Patton as the Darkness

-short length of the campaign

-graphical hiccups and slow framerate toward the end