3 min read
Add comment
FacebookTwitterRedditPinterestEmail
Project X is chaotic in presentation with a storyline that remains very predictable, but ultimately delivers enough humor to make it worth viewing. 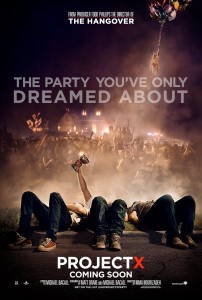 When leaving a screening of Project X, the first thought in my mind was, “What the hell am I going to write about that?” It’s certainly not the easiest movie to classify and dissect. However, I will go right ahead and say that it’s incredibly funny. That much is undeniable, but there is a sense of worry that went along with watching a movie like this.

The story line is very typical of high school movies. Let me set up a couple plot points and you feel free to predict the outcome on your own, because you’ve seen it all before:

– Main storyline: Three “losers” (Thomas, Costa, and JB) decide that the path to “cool” is throwing a booze-filled, moderately-sized party in hopes of getting laid while the parents are away…

– Absurd subplot: After scoring some drugs from a former military burnout, Costa thinks it’s a good idea to steal his yard gnome…

If you’ve ever watched movies before, I’m sure you’ll have no trouble completing those plot points. While chaotic in presentation, the storyline remains very predictable.

So why worry? When it comes to movies, TV, video games, and pretty much all forms of entertainment, I’m very liberal. I will also admit that I’m not a big partier, never have been, but aside from being entertaining the movie also struck me as being a bit socially irresponsible. The movie really is just one big party. There’s no underlying message, moral, or life lesson that I could pull out of it. At one point, it felt like the movie turned on itself and took a darker, more “sober” look at what was going on. I thought that perhaps the whole thing was a setup for some social commentary, but unfortunately it didn’t spend nearly enough time going down that road. The movie also only views women through the eyes of the three hormonal male leads, as none of the female characters are fleshed out beyond basic descriptions like “hot, popular girl” or “cute childhood friend.”

The presentation is one that’s becoming more popular lately, that of the “found footage” video. While it does increase the realistic vibe and audience immersion, it wasn’t handled as well as the recent Chronicle, as most of the movie is seen through the lens of one camera instead of using a compilation of multiple views. There were creative uses of this type of shooting, as jokes could be quickly brought on and off the frame, leaving the viewer to process and enjoy it for longer than it was on the screen. The combination of the bouncing camera, high energy atmosphere, and general chaos can be overwhelming though, leaving the viewer exhausted. I imagine this was intentional though, as it replicates the energy level of the post party-goers themselves.

While it may look as though I’m just complaining about the movie, I do want to reiterate that it was still ultimately entertaining. There are more than a handful of moments when you’ll be laughing out loud, and just as many where you’ll feel Thomas’s anxiety. Overall, it’s best classified as more of an experience that you have (and hopefully one that stays vicarious) than just a movie that you watch.

Bottom Line: Project X is chaotic in presentation with a storyline that remains very predictable, but ultimately delivers enough humor to make it worth viewing.