1 min read
Add comment
FacebookTwitterRedditPinterestEmail
Sony Pictures has reportedly offered a deal to Brian Taylor to write and direct a movie based on the popular Twisted Metal video game franchise. 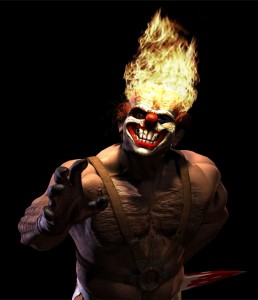 Sony Pictures has reportedly offered a deal to Brian Taylor (Ghost Rider: Spirit of Vengeance) to write and direct a movie based on the popular Twisted Metal video game franchise. Avi and Ari Arad are producing the video game adaptation.

Like the game, the story of the film would revolve around an underground event in which contestants drive heavily-weaponized vehicles competing in to-the-death combat. The sole survivor of the event wins one wish from Calypso, the proprietor of the race who organizes it to continue his obsession with studying the human condition.

Deadline also reports that the film will include such signature characters as Sweet Tooth, a homicidal clown who drives an ice cream truck, and Doll Face, a young woman who is trapped behind a porcelain mask and drives an 18-wheeler.

If all moves forward as reported, this will be the first solo venture for Taylor, who has constantly worked alongside Mark Neveldine on previous projects such as the Crank series, Gamer, and the recently released Ghost Rider: Spirit of Vengeance.