9 min read
Add comment
FacebookTwitterRedditPinterestEmail
It's the post-apocalyptic, wild west gunslinging, Mad Max-style driving FPS in which ID Software and Bethesda deliver one of the most undervalued titles of 2011.

It’s the post-apocalyptic, wild west gunslinging, Mad Max-style driving FPS in which ID Software and Bethesda deliver one of the most undervalued titles of 2011.

The “post-apocalyptic FPS” genre has been something of a popular gaming commodity in the past few years. I remember games like Borderlands, and, to a degree, Singularity trying to provide gamers with an experience that included ravaged landscapes, obliterated cities, crazed, marauding gangs and vile monsters. Well, suffice to say neither of these games did it for me. I could dismiss Rage as simply another game that delves into what I consider a burgeoning genre, yet one that I predict will only flourish in popularity in the future, but has not had an experience captured correctly on consoles. Yet I must concede that ID Software and Bethesda have delivered an enjoyable, co-op romp and race through savage territory at breakneck speeds.

Story/Presentation: The truth be told, the story for Rage is pretty vague. You play the role of an “Ark survivor,” an individual who crash lands on a nondescript planet inhabited by roving gangs and bandits, mutants, and other aberrations that I’ll leave the player to experience. On top of all these problems the player encounters, a government group called The Authority is on the lookout for Ark survivors and you are public enemy number one if they discover you. Again though, pretty vague story if I do say so myself.

The game menus are pretty standard, with little or no gloss or flair added. A basic start and load screen are coupled with longer than usual load times, as well as a huge (8GB) install on the PS3 (note that the game is spread across 3 discs for the Xbox 360). I was not a fan of the 20 minute install on the PS3, but understand why it was done in order to cut down the load times. The whole game pretty much runs off the hard drive.

Gameplay: Rage’s gameplay is a varied experience for a FPS, with three ways to play the game. It has no “true” competitive multiplayer except for a car combat mode (we’ll get to this shortly though). 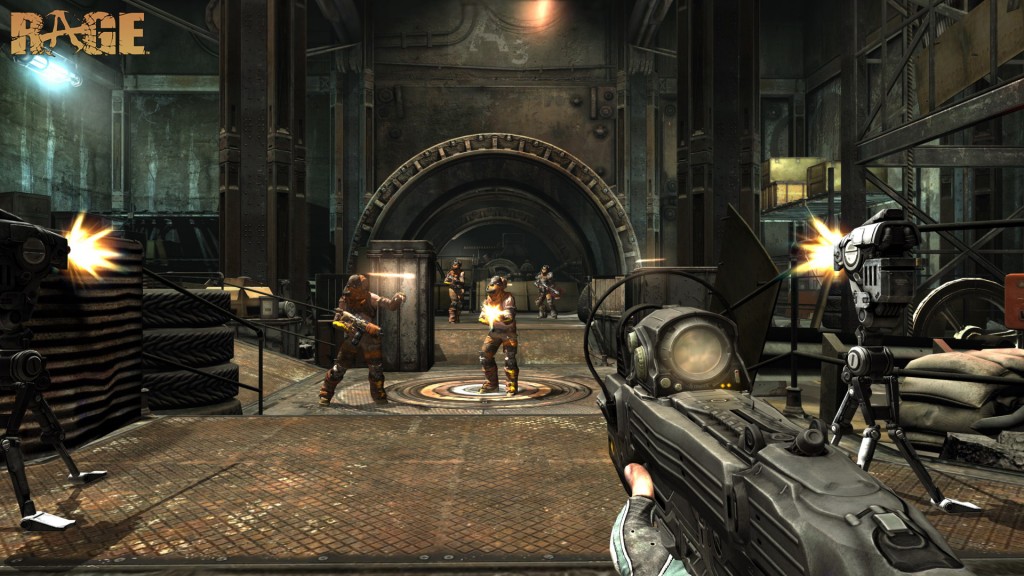 The single player campaign mode can be tackled with a friend or alone. The main story involves players traveling around the wasted planet, going to various settlements and taking on a myriad of jobs and tasks from the denizens that reside there. All these tasks earn you anything from goods, cash, weapons, junk, etc. Goods in this game range from materials used to build your own devices, extra weapons, and cash… which is king in Rage. The game relies heavily on cash and looting the corpses of fallen foes, as you use money to buy many serious upgrades from shopkeepers. Junk and other materials can be used in conjunction with recipes that are collected, which can be purchased at shops or found throughout the world. I really enjoyed the engineering aspect of Rage where you craft awesome items (think building stuff in Bioshock). Weapons are pretty standard, such as pistols, a couple of shotguns, machine guns and a crossbow (rockets become available as the game progresses). All of the weapons have different ammo types (i.e. electric crossbow bolts are one type of ammo that lets you shock enemies, or shoot water puddles to kill multiple enemies who happen to stray into them). What I like about the various ammo types is that you get a decent weapon load out early in the game and hold onto all your weapons throughout the game without having to pick up any on the ground like so many shooters these days. Ammo can also be engineered if you are low, provided you have the right parts.

In settlements, mini-games and gambling are ways to earn quick cash, and these can be some much needed diversionary enjoyment. There is a Magic: The Gathering-style card game with 54 cards players can collect in game, and customize their decks accordingly to play the game. A knife stabbing game is a nice homage to Bishop in Aliens, where players have to stab accordingly in between their fingers to earn money. “Tombstones” is a futuristic version of Craps, where players roll dice to take out holographic mutants before they attack, and various vehicle races which the player can tackle at their leisure.

Racing and driving is an integral part of the game, and surprisingly, really flawlessly executed. Players can access various cars they can upgrade by earning race certificates in various wasteland races. Ammo, guns, tires… all of these things are upgradeable, and various defensive measures can be purchased for cash such as vehicle shields, caltrops, and vehicle repair modules. It’s like 007’s Aston Martin capabilities, but in a Mad Max style junk car! Driving is a breeze, and your car even flips over for you if you land upside down on the roof, which negates the need of crawling out of your conveyance and running away before it explodes (which I call the crappy GTA model of escaping a wrecked vehicle). Should your vehicle be wrecked, a tow service gets you back to town and your car repaired. Just call it in the game. 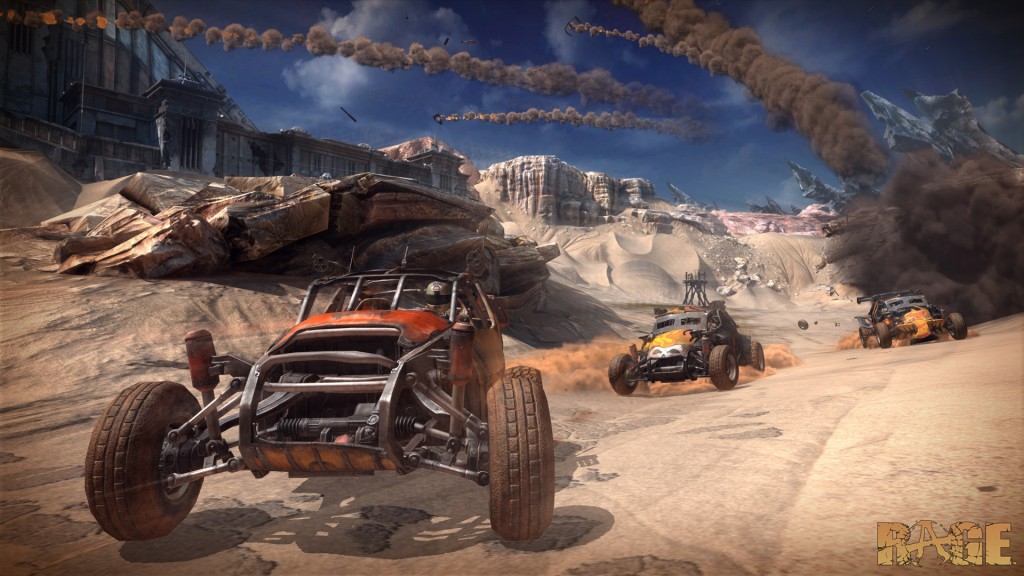 Combat in Rage is the classic ID formula, with fan service paid to lovers of the classics such as Doom and Quake. Run-and-Gun coupled with intelligent enemy AI, even on Normal difficulty, make this a shining example of what FPS games should be. Bandits move with speed, guile, and finesse, player sniping requires patience, and all in all this is all I could have asked for from ID. Using the trigger buttons allows for quick weapon switches and item deployment. For example, automated sentry bots and turrets can be constructed for combat defense, damaging enemies with lethal precision. I like the fact that simple items the player constructs help the player in a positive way thanks to competent AI. Enemies range from foot soldier archetypes to gargantuan and heavily armored. My only gripe is with damaging these armored enemies that show up in the game at the midpoint. It takes careful strategy, correct ballistic selection, and explosives to take them down, and this can be difficult if you don’t have the correct ammo loadout. Fortunately, dying in game means life. Players are equipped with an upgradeable defibrillator unit that brings them back to life, depending on the charge you receive in the defibrillator “mini-game” that activates when you die. The catch is that the unit needs time to recharge, so if you die, you have to plan attacks more cautiously, or else dying again will cause you to reload your previously saved game.

Graphics: I don’t say this lightly: Rage has some of the best graphics for the current generation consoles. The drab colors of the desert, the crystal blue sky when you look up, and the level of detail put into the world, especially around destroyed buildings and cities, made me feel like I was living after the apocalypse. The details really made the game shine. Also, the game runs at at least 35 frames per second (if not more) with no slowdown. Enemy movements are fluid, and I would say the character models rival such games as LA Noire and Uncharted 3. ID developed games are known for being graphic powerhouses and they don’t disappoint on this one. 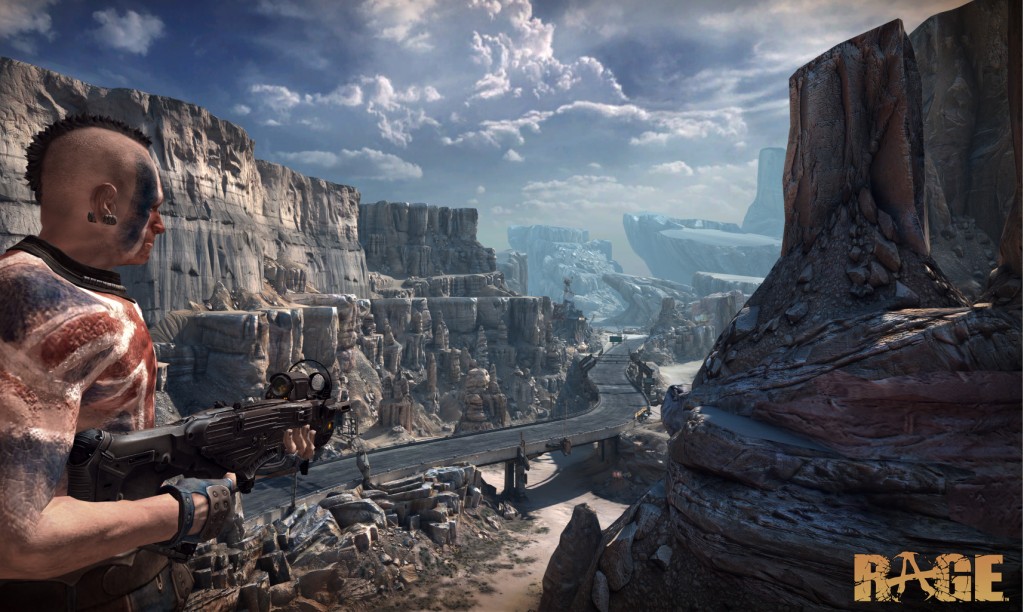 Sound: DTS quality sound bring out the grunts, groans, clip loading, gunshots, the rev of engines, screech of tires, and the clink of miniguns on top of your ride. Rage has some superb sound design and some colorful dialogue to boot. Definitely should be experienced on a DTS capable system.

Multiplayer: A quick note on multiplayer… Rage includes a competitive combat mode for all-out four player racing wars. The car handling in game is great, so I can assume it is great in multiplayer as well. Purists I am sure pissed and moaned like babies that there was no competitive FPS multiplayer, but Rage’s structure and campaign would have made that hard to achieve. I was pleased that co-op was included, and the AI, as far as the campaign was concerned, was sufficient enough for a challenge.

Verdict: Rage is one of those games that, in my opinion, fell under the radar during the game rush of the 2011 holiday season, probably due to the fact that conformist, bottom-feeding fools saved their gaming dollar and went out to pick up Modern Warfare 3 because everyone else did. It really is unfortunate, because this is one of the BEST shooters to come out in a long time. There is something for everyone in the package, especially for those looking for an original shooter combined with car combat style racing. The only improvement that could have been made, and I admit I am nitpicking, would be for better, maybe slightly easier, ways to take down armored enemies and a little more variety in the vague story. This is after all, a game that should be heavily story driven, as there is no true FPS multiplayer component. The story dragged a little toward the second half of the game, but overall it’s a 12 plus hour game to do everything in the campaign, a rarity (and welcome one) in gaming today.

Shortcomings notwithstanding, Rage remains purely enjoyable in a Bioshock sort of way, and if you see it is on sale (as I have seen it recently) definitely pick it up. Loot Rage today, like a dead mutant, for it could very well be the template for future games based on the “post apocalyptic world” genre!

– Vague story that could have been more varied