2 min read
4 comments
FacebookTwitterRedditPinterestEmail
If you think geeky conventions are stupid, Twilight fans have taken stupid to another level.

Look, we’ve all been there geeks. Think back to the time (OK, times, because I’m sure this happened more than once) when you had a crush on that really attractive girl in school. You were conflicted. Do you play it cool and renounce all things geeky so you’re not seen as some lesser being in her eyes, or do you embrace who you really are and geek it up? More than likely you did nothing out of sheer terror, but that’s not my point. Geek guys have always felt shunned and intimidated by the geeky stereotypes associated with their interests. Forever have we been shunned and picked on for going to a comic book or Star Trek convention, because who would gather with all those other people just to meet a celebrity or find that one collectible we’ve been looking for? 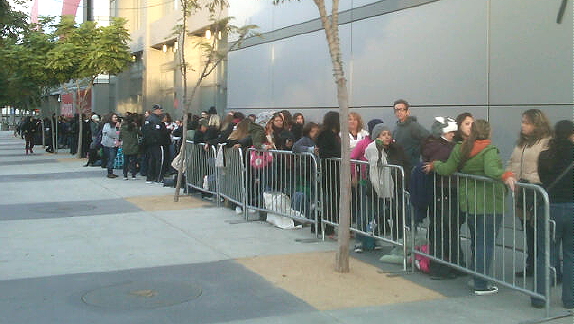 Well the tables have turned gentlemen, and it’s all thanks to that vampire abomination called Twilight. That attractive girl I mentioned above? She’s probably into that crap now. I’m officially pulling the geek-shunning card from their deck, because right now (Thursday, mind you) in Los Angeles, there are 700+ Twi-hards lining up just to catch a glimpse of the stars of The Twilight Saga: Breaking Dawn – Part 1 as they walk the red carpet at Monday’s premiere. Let me repeat that for those of you who weren’t paying attention. These Twi-tards (not a typo) are lining up THURSDAY to see some celebrities walk the red carpet on MONDAY. They’re not even watching the movie!! They’re watching the people IN the movie walk on a rug!!

I think I’ve made my point. Game. Set. Match.