Showtime has ordered two more seasons of its award-winning, top-rated drama series Dexter, starring Golden Globe award-winning actor Michael C. Hall. On the heels of Hall and Showtime closing a new, two season deal for Hall to return to the series, production will begin on season seven in 2012 in Los Angeles. Seasons seven and eight will consist of 12 episodes each. 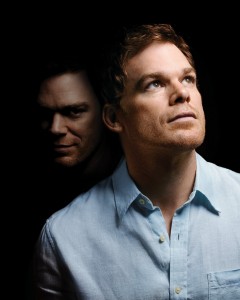 The Emmy-nominated Dexter opened its sixth season in October and continues to earn impressive ratings, most recently delivering its fifth consecutive week of growth. Season-to-date, the series is averaging 5.12 million weekly viewers on all platforms (including On Demand, replays and DVR), making it the highest rated season yet.

“Dexter ‘s enormous success is a real tribute to the great achievements of its cast, producers, and the powerhouse performance of Michael C. Hall,” said Showtime’s President of Entertainment David Nevins. “The series is bigger than it’s ever been in its sixth season, both in terms of audience and its impact on the cultural landscape. Together with Michael, the creative team on the show has a very clear sense of where they intend to take the show over the next two seasons and, as a huge fan, I’m excited to watch the story of Dexter Morgan play out.”

Michael C. Hall added, “On behalf of the entire Dexter family, we relish the invitation to delve ever deeper into Dexter’s world.”

One of the most acclaimed shows on television, Dexter stars Hall, who has earned multiple Emmy nominations as well as a SAG award for his role as a complicated and conflicted blood-spatter expert for the Miami police department who moonlights as a serial killer. The show has received multiple Emmy and Golden Globe nominations for best television drama series, as well as a prestigious Peabody Award in 2008, and was twice named one of AFI’s Top Ten television series. The series also stars Jennifer Carpenter, Desmond Harrington, C.S. Lee, Lauren Vélez, David Zayas, and James Remar.