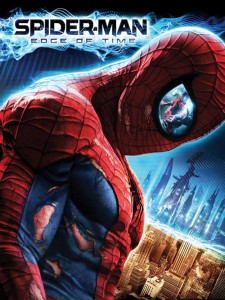 Last year, Spider-Man: Shattered Dimensions returned our friendly neighborhood Spider-Man to greatness with a lengthy, streamlined crawl that brought the visions of four different universes to fruition on next-gen consoles. This years follow up, Spider-Man: Edge of Time, unfortunately stumbles a few times in an attempt to capture the formula which made last year’s game the hit it was. In fact, it stumbles to the point that sometimes you would swear Peter Parker and Miguel O’Hara shared a few drinks before embarking on this adventure to save two parallel realities from ultimate destruction.

Plot: In order to keep would-be players in suspense, the storyline of Edge of Time (written by veteran Spider-Man 2099 scribe Peter David) revolves around the present and the future of the Amazing Spider-Man universe, and that of his counterpart, Spider-Man 2099. Walker Sloan, an Alchemax employee of the future, attempts to alter his reality by going back in time to found Alchemax. Sloan succeeds, and the time line is altered, leading to an alternate New York being created. It’s time for both Spider-Men to swing into action and fix what has been done.

Overall, the story serves its purpose, with what seems like a lot of heavy research done in order to give fan service to loyal Marvel fans of both Spider-Men. I enjoyed the telling, and the voice actors really added a flair to some of the dialogue, primarily Christopher Daniel Barnes (Spidey 2099), who voiced the Amazing Spider-Man in the 1990’s cartoon.

Gameplay: With last year’s game revolving around 4 different universes, Edge of Time attempts to streamline the players experience with two Spider-Men, and two upgradeable move sets. Collecting orbs and large experience boosts enable the player to customize each character, with a third shared move set providing basic moves for both Spider-Men. Unfortunately, with all the upgrading and moves, I found myself focusing more on hammering the square and triangle button to defeat enemies, while using my decoy or acceleration (both dodge-style moves) to take out enemies. In essence, glorified button mashing. This is fine for a game of this type, but why bother with the elaborate move sets? Never did I find myself using at least half of the moves I upgraded, compared to last year where I used just about everything in Shattered Dimensions. Aside from orbs, golden spider tokens make their return to upgrade abilities such as acceleration and decoy, health meter, and health regeneration. 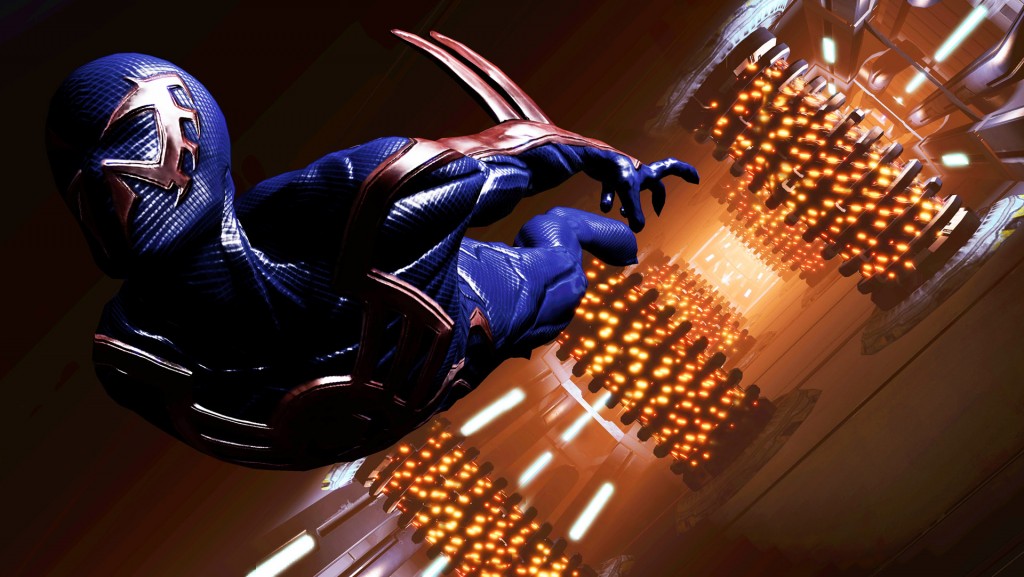 Combat, as stated, is a bit of a button mash festival against the typical small, medium, and large groups of minions Alchemax throws at you. Finding your groove in combat, you can rack up some impressive combos (past 200 hits) in tandem with your decoy, acceleration, and web zip smash. The problem is, when playing as Spidey 2099, I felt overpowered against enemies, given he has a shield that absorbs hits and his attacks generated more damage than the Amazing’s did. The biggest disappointment was, however, that there was no opportunity to choose a path where actions in the past or future change anything. You essentially just play through the sixteen chapters, alternating between both Spider-Men, until you reach the end. The overall challenge of the game was a bit lacking, with some really frustrating enemy encounters. By far the worst were the free fall sequences when playing as 2099, with poor collision detection and imprecise control at times.

Replayability: If you enjoy beating the same enemies over and over again, a second play through might be warranted. The meat of the game is really in the web of challenges, where medals can be earned. Silver or Gold will earn you unlocks such as concept art and costumes, as well as golden spiders that unlock character abilities. The real incentive to do well in the challenges and earn at least silver medals is the myriad of costumes, ranging from Spidey’s “Future Foundation”, “Big TIme”, “Spider Armor” and “1602.” The list is huge with over thirteen costumes to unlock. A hard mode opens up once you beat the game, but you’ll still be fighting the same enemies over and over again. 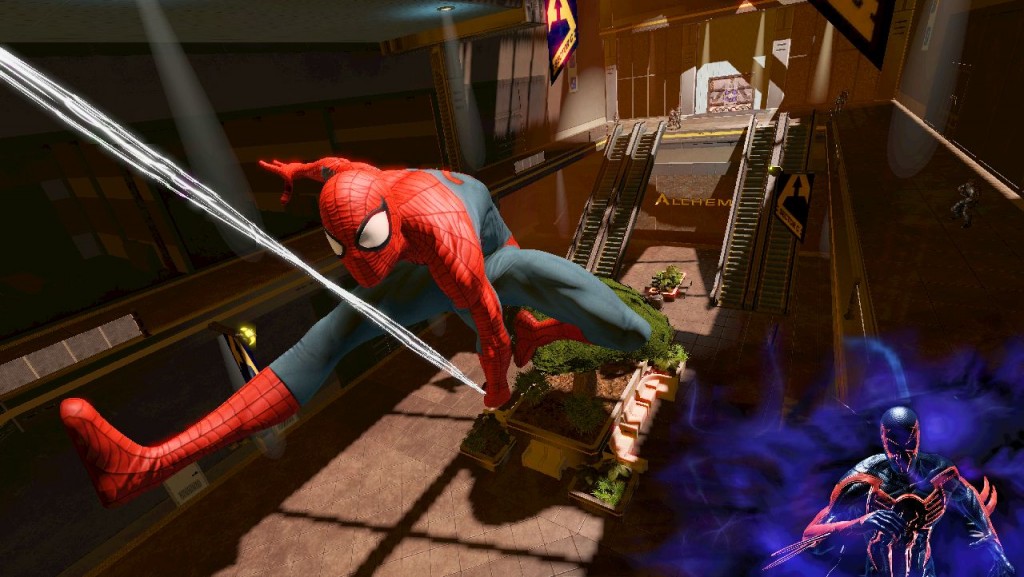 Overall: Edge of Time is ultimately a button mashing beat ’em up that attempts to capture the essence of Shattered Dimensions from last year. While it does a good job with dialogue and storytelling, the gameplay is just lacking. Add in the frustrating free fall sequences, and you don’t have the worthy successor to Shattered Dimensions. That being said, the web of challenges and unlockable costumes definitely give fan service to die-hard Spider-Man fans. Unfortunately, with the fall gaming season in full swing, people may not be apt to picking this one up because of all the other top shelf games coming out (Arkham City, anyone?) For the casual player, Edge of Time is a good weekend diversion, but I recommend only making the purchase if you are the Chameleon and just robbed a bank, and want to part quickly with your gaming dollar.