2 min read
Add comment
FacebookTwitterRedditPinterestEmail
Horrible Bosses has arrived at a time when the economy can make people feel like they're locked into their jobs and serves as a humorous, commiserating companion. 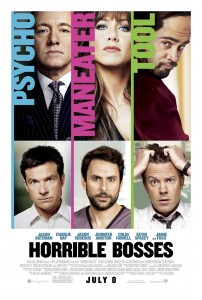 Nick (Jason Bateman), Kurt (Jason Sudeikis), and Dale (Charlie Day) have horrible bosses. Nick’s boss (Kevin Spacey) likes to toy with him while dangling the possibility of a promotion over his head. Kurt’s boss (Colin Farrell) is a coked-up loser sucking his daddy’s company dry. Dale’s boss (Jennifer Aniston) is the definition of sexual harassment. This could be a welcome thing, except Dale has a new fiance that he doesn’t want to mess things up with. The three hatch a plot to rid themselves of their living nightmares once and for all… murder each other’s bosses.

The majority of humor in this movie comes from the trio’s clumsy attempts to plan and prepare these murders. They’re SO bad at it that they hire a murder consultant played by Jamie Foxx. I’d tell you his character’s name, but I try my best to keep my movie reviews clean. The movie works so well because of the performances given by each of the three bosses. They’re all despicable human beings that are just on the edge of believable, but outrageous enough to serve as caricatures of bosses that the audience may be all too familiar with.  Each is heartless enough to get the audience excited for their potential demise.

The performances were solid all around. The trio have great chemistry with Jason Bateman serving as the straight-man, Charlie Day as the bumbler, and Jason Sudeikis as the punchline-dropper. In some ways they felt like a modern-day Three Stooges with slightly more brains and a tad less slapstick. Colin Farrell’s role is almost too small to note, but was fine for what it is. Kevin Spacey couldn’t come across as a more slimy, disgusting person, and pulls off an attitude that few actors can. Jennifer Aniston is surprisingly raunchy, which is hilariously shocking in terms of the movie, but yet very welcome to see as she’s been locked into the same type of role for so many years.

Bottom Line: Horrible Bosses has arrived at a time when the economy can make people feel like they’re locked into their jobs and serves as a humorous, commiserating companion.