2 min read
Add comment
FacebookTwitterRedditPinterestEmail
TNT has summoned Franklin & Bash back to the stand for a second season of the hit legal dramedy starring Mark-Paul Gosselaar and Breckin Meyer. 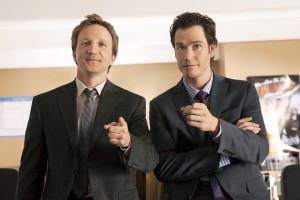 TNT has summoned Franklin & Bash back to the stand for a second season of the hit legal dramedy starring Mark-Paul Gosselaar and Breckin Meyer. Currently airing Wednesdays at 9 p.m., Franklin & Bash ranks as one of basic cable’s top new series of the summer. TNT has ordered 10 episodes for the second season.

“This summer, Franklin & Bash has broken out as a hugely entertaining series with great characters, sharp writing and a terrific cast,” said Michael Wright, executive vice president and head of programming for TNT. “We’re thrilled that the show has drawn such a remarkably strong following and look forward to bringing it back next summer.”

Since premiering on June 1, Franklin & Bash has drawn 3.9 million viewers, ranking it among basic cable’s Top 5 new series for the summer-to-date. The series is averaging an outstanding 1.8 million adults 18-49 and adults 25-54. Franklin & Bash scores a significant number of viewers through time-shifted viewing, including a boost of well over 50% among key adult demos.

Join PB and Rob as we chat with our friend Mirggles about Lord of the Rings and marble races, then talk about some computer problems, crowdfunding...