4 min read
Add comment
FacebookTwitterRedditPinterestEmail
Captain America: The First Avenger tells a fantastic story of an underdog standing up to a bully... with a badass vibranium shield. 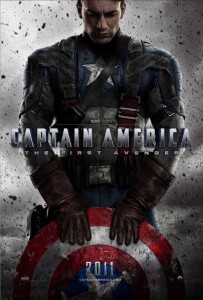 There has been a long list of superhero movies recently, and along with them, the fear that the genre may become watered down. But have no fear, Captain America is here. Captain America: The First Avenger is the story of Steve Rogers (Evans), a guy from Brooklyn, New York in the 1940’s who wants nothing more than to do his part and serve his country. The problem is that Rogers isn’t exactly a physical specimen. He’s short, scrawny, and asthmatic, but the one thing he does possess is the heart of a hero. It doesn’t take long for this to get recognized by a military doctor who nominates Rogers to undergo the Super Soldier treatment he has developed. A few injections and Vita-rays later, and Rogers is not only a more impressive human specimen, but a superhuman one.

On the other side of the coin is Johann Schmidt, aka, the Red Skull (Weaving). Schmidt is the head of a Nazi deep science division called Hydra and was the first to undergo the Super Soldier treatment, but chose to use it prior to its completion, therefore undergoing scarring physical side effects. The Red Skull sees himself as a superior being, and insists the rest of the world view him in the same way. In order to accomplish this, he seeks out the Cosmic Cube, an ancient artifact that is said to have been left behind by the gods themselves. Using the Cube, his forces create a new breed of powerful weapons which he plans to use to eradicate major cities across the world as a demonstration of his power.

The only way a hero like Captain America can work is if his rise to the name and suit are believable. He can’t merely throw on a costume and start using the name. The movie does a great job of showing this evolution from the scrawny Rogers to the USO “dancing monkey”, to the icon that we know and love. The movie does such a great job at establishing the goodness in Roger’s heart, that even when he is the heroic, larger-than-life Captain America, we can still look into him and see the person he always was. Ultimately, that kind of heart is what the story of Captain America is all about, and fortunately the film never forgets that.

The action scenes in The First Avenger were fluid and satisfying. Just as Thor’s hammer can be a challenging weapon to portray, so is Cap’s vibranium shield, and just as Thor made wielding a hammer look cool, so does Captain America in regards to his shield. There is one scene in the film in which there is a motorcycle chase that made me think of Raiders of the Lost Ark. Perhaps it’s the inclusion of Nazi villains or the period in time, but it was a welcome parallel.

Chris Evans veers from his usual cocky comedy self in order to play Steve Rogers, and he does so incredibly well. That’s not to say there’s no humor, it’s simply spaced out in order to keep the role from becoming a caricature of so many superheroes we’ve been seeing on the big screen. Hugo Weaving is the perfect casting for the Red Skull, and pulls off the unforgiving evil demeanor of the character. The remainder of the cast, from Hayley Atwell to Tommy Lee Jones to Sebastian Stan as Bucky Barnes bring more levels of depth to the already immersive story.

Captain America: The First Avenger succeeds on so many levels where it could have faulted. It’s not an overly patriotic story holding the USA up on a pedestal. It’s the universal story of an underdog standing up against a bully. It offers just enough comic book “cheese” to make it extraordinary, but still grounds it in reality. And for the ladies, it also contains the most romantic and believable love story of any of Marvel’s superhero movies. Well done Cap, now bring on The Avengers!!

Bottom Line: Captain America: The First Avenger tells a fantastic story of an underdog standing up to a bully… with a badass vibranium shield.