3 min read
Add comment
FacebookTwitterRedditPinterestEmail
The Sentinel of Liberty faces off against the forces of evil in this Captain America: Super Soldier launch trailer.

SEGA today announced Captain America: Super Soldier, the original video game adventure for Marvel’s famed super hero franchise, has shipped and is available in stores today. The stirring WWII superhero adventure is now available for the Xbox 360, PlayStation 3, Wii, and Nintendo DS. The versions for the PlayStation 3 and Xbox 360 feature stereoscopic 3D graphics and a 3D version for Nintendo 3DS will be in stores October 25, 2011. 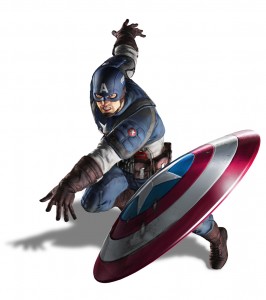 “Players can leap into acrobatic combat as the world’s first Super-Soldier with Captain America: Super Soldier,” said Gary Knight, Senior Vice President of Marketing at SEGA Europe and SEGA America. “When you combine an iconic superhero with a devastating combat system, an original story penned in conjunction with Marvel and stunning 3D graphics, you get an epic action adventure worthy of the First Avenger.”

“We are thrilled to offer players the opportunity to play as Marvel’s Star-Spangled Avenger in Captain America: Super Soldier,” said TQ Jefferson, Vice President of Production, Games, Marvel Entertainment. “Captain America is the quintessential hero of the Marvel Universe. He’s the one all other heroes look up to, and we couldn’t be happier with SEGA’s efforts to deliver a quality experience in his first solo console game adventure.”

Captain America: Super Soldier transports players to the darkest days of World War II to face the Red Skull and his Hydra forces. Playing as Captain America and wielding his legendary shield, gamers will engage in free-flowing combat and acrobatic platforming to infiltrate Hydra’s mysterious castle. Once inside, players will battle the infamous Iron Cross, the forces of Hydra, and a host of nefarious enemies lifted from the pages of the comics as they seek uncover the secrets of the evil scientist, Arnim Zola, and his wartime experiments.

Captain America’s shield can be employed in numerous ways: taking out multiple enemies at once, deflecting incoming fire back at enemies, solving puzzles, and scaling walls. Players can fully utilize the impressive athletic abilities of the first Super-Soldier to overcome environmental challenges and discover multiple mission paths by scaling walls, climbing, and performing spectacular leaps and vaults. No matter which game platform they choose, players will be able to leap shield-first into the fray.