According to io9, the Wonder Woman TV pilot script is undergoing a lot of changes, and from the sounds of them, they’re all getting the show on a much better track. David E. Kelley’s original draft pilot script was much more in the vein of shows he’s done in the past, and would have “included lots of Diana crying, moping over ice cream, and hunching in a fetal position.” Sounds frightening and along the lines of what fanboys were fearing.

Fortunately, the script alterations appear to be making Wonder Woman much less Ally McBeal and more Amazonian badass. Here are some scene revision descriptions provided by i09: 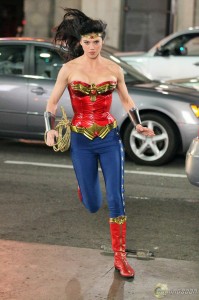 At one point, she confronts a pair of security guards, whom the script calls Frick and Frack. They tell her she can’t go up to the roof of a hospital, and she says, “I’m Wonder Woman. How do you think this ends?” And then she lifts one of them into the air by the throat and the other one by the chest, until they admit they’re goons working for her nemesis, Veronica Cale.

There’s also a hilarious scene where Diana is driving, and a male driver cuts her off in traffic and makes an obscene gesture. She gives him the finger, and he pulls in front of her, blocking her. They both get out of their cars, and he says his obscene gesture was “implying something that might be good for her.” He grabs her arm and says, “Maybe I should teach you some manners.”

Without giving any real spoilers, the final fight scene is beefed up considerably in the revised script. The dialogue is also revised to make it clear that the people Wonder Woman is fighting are prepared to use deadly force to stop her.

Lastly, it seems that the revised script will be doing the characters much more justice, by properly fleshing out Wonder Woman’s motivations and playing around with the romance between her and Steve Trevor.