3 min read
Add comment
FacebookTwitterRedditPinterestEmail
Source Code is a mystery as fast-paced as the train it takes place on, with unexpected turns lining the track ahead. 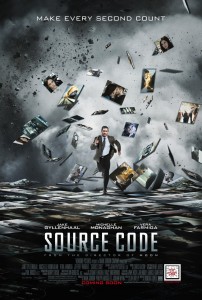 Some people like their movies summed up by comparing it to other similar movies, so for those people, here’s an equation: The Matrix + Groundhog Day + American Beauty = Source Code.

Source Code is the story of Captain Colter Stevens (Gyllenhaal), a military man who is part of a new project in which his mind is transmitted into the “memory echo” of a recently deceased terrorist attack victim. This is The Matrix connection. Once occupying the body of the train passenger pre-mortem, he has 8 minutes to find the bomb and bomber before the train explodes. If he fails, he can go back in and repeat the same 8 minutes, but this time can adjust his actions and hopefully return successful. This is the Groundhog Day connection. The whole purpose of doing this is to find another, larger dirty bomb that the same terrorist is planning on detonating if he’s not caught in time. So where then does the American Beauty connection come in? For me, American Beauty was one of those movies that struck your soul and made you really appreciate the gift of life and every second you have. Sure, it’s wrapped in a different package, but Source Code had the same effect.

There are not a lot of bad things to say about this movie. The performances were solid, particularly from both Jake Gyllenhaal and Vera Farmiga. For having the same initial sequences repeated as often as they were, each time it was presented in a different way that prevented it from feeling overly repetitive. With only 8 minutes at a time to get things done, you can imagine how fast-paced the action had to be, which results in some suspenseful moments. And to top it all off, there are layers of complexity here far beyond what the trailer had originally suggested. Let’s just say that the terrorist bomb plot is only half of the mystery. I won’t go into it any further than that since I don’t want to ruin anything.

Source Code is also the sophomore effort by director Duncan Jones, who hides behind a fake name for a reason that escapes me because soon after directing Moon it became widely known that he is the son of David Bowie. Famous father and pseudonym aside, if Jones keeps putting out quality flicks like Moon and Source Code, he’ll soon be on the fast-track to directing the next big Hollywood blockbuster.

Bottom Line: Source Code is a mystery as fast-paced as the train it takes place on, with unexpected turns lining the track ahead.

After 3 years of Quantum Drive, Rob and Katie take some time to answer listener questions and share more about themselves.