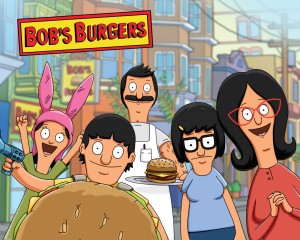 The President of Entertainment at FOX, Kevin Reilly, announced today that Animation Domination newcomer Bob’s Burgers has been renewed for a second season.

“Bob’s Burgers has proved to be a perfect neighbor to our slate of fan-favorite animated families this year,” said Reilly. “The series has found its own really unique, irreverent voice and is doing consistent business for us on Sundays, so we’re excited to serve up another season to the fans.”

The premiere of Bob’s Burgers this year was the highest-rated new series debut on any network so far this season. The series currently ranks among the Top 10 programs this season among young men.

Bob’s Burgers follows a third-generation restaurateur as he runs his own burger joint with the help of his wife and their three kids. Bob has big ideas about burgers, condiments and sides, but only a few thoughts on customer service and business management. Despite his greasy counters, lousy location and occasionally spotty service, Bob is convinced his burgers speak for themselves. The animated series features the voice talents of H. Jon Benjamin, John Roberts, Dan Mintz, Eugene Mirman and Kristen Schaal.