4 min read
Add comment
FacebookTwitterRedditPinterestEmail
Aside from a few flaws, The Adjustment Bureau tackles the continuing question of fate vs. free will in a creative and exciting way. 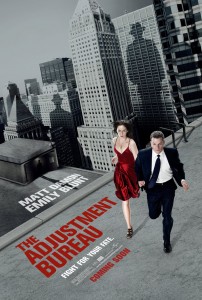 After losing an election for the U.S. Senate, David Norris (Damon) has a seemingly chance encounter with a beautiful woman in the men’s bathroom while preparing his concession speech. Elise (Blunt) is a woman unlike any he has ever met and serves as the catalyst for a speech that gets his political track back on course. The two share an intimate moment before being separated with no way of contacting the other. Another chance encounter brings them together yet again, but leads to a revelation for Norris. Arriving “too early” to his office, he finds a group of mysterious men who are orchestrating the behaviors and altering the minds of the people in his life. He is a given a brief peak behind a curtain that most never see and learns of a predestined plan for both his life and the woman he now loves. David is given the difficult choice of being with Elise and watching their dreams crumble, or having both his and Elise’s dreams fulfilled, but in order to do so, they must stay apart.

The Adjustment Bureau is another movie in the reality-bending genre that invokes the important question of fate and predestination. Are the choices we make the determining factors of our lives, or are we all ultimately subject to a greater power that has our lives planned out for us? Not only the title of the movie, The Adjustment Bureau is a group of mysterious men who are altering the judgment and events of peoples’ lives in order to make sure they stay on the written path. Their influence reminded me of the beings in Dark City, but the intentions of the Bureau are nowhere near as malicious.

The movie does a great job of setting up the life of David Norris, providing plenty of motivation as to why he’s a politician and how much career success is important to him. This in turn makes his decision that much more meaningful. The later acts of the movie become a cat-and-mouse game, with David and Elise doing what they can to dodge the Bureau. I don’t feel I’m spoiling anything with that, because what’s a movie about fate vs. free will going to do other than challenge the idea of fate? The cat-and-mouse portion is handled extremely well, combining intense, edge-of-your seat chase scenes with the audiences’ desire to root for the forbidden lovers. Another successful aspect of the movie is the focus on the members of the Bureau. While it seems that they have a higher power to answer to and a job to do, they aren’t denied their free will.

Matt Damon and Emily Blunt have fantastic on-screen chemistry, and they’d have to in order for us to get behind them. Aside from their performances, both John Slattery (who I’m a big fan of) and Anthony Mackie both shine as members of the Bureau.

There were, unfortunately, a few flaws in the movie that kept it from being ranked higher. The fact that David Norris is given a choice at all as to how his fate will play out somewhat undermines the idea of fate at all. However, I am making the assumption that they were actually presenting him with a choice, as opposed to just telling him that he had one while interfering to ensure he makes the choice that they want. Couldn’t they have just influenced his mind as they had with his co-workers, or is there some rule against doing that in his case? The movie also ends rather abruptly. There is a clear ending, but it moves very quickly from a frantic pace to the conclusion and credits. It’s worth noting that the movie’s release date was pushed back 6 months from its intended release. I imagine some re-tooling was done in this time, and perhaps the abrupt ending was a result of this.

Bottom Line: Aside from a few flaws, The Adjustment Bureau tackles the continuing question of fate vs. free will in a creative and exciting way.

After 3 years of Quantum Drive, Rob and Katie take some time to answer listener questions and share more about themselves.