3 min read
Add comment
FacebookTwitterRedditPinterestEmail
Limitless has a great "what if?" premise and follows through to deliver an exciting thrill-ride. 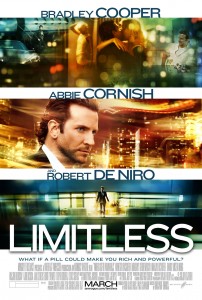 Eddie Morra (Cooper) is a fairly untalented, or maybe just unmotivated, writer until his former brother-in-law Vern offers him a little clear pill that allows the user to unlock the full potential of their brain. Upon “awakening” with a new-found mental prowess, Eddie succeeds in accomplishing tasks in mere hours that months of struggling couldn’t achieve. He finishes his book in days, accesses subconsciously-stored memories with ease, masters the stock market earning him millions, and learns new languages by simply hearing them in the background. Unfortunately, it quickly becomes clear that this world offers more than just successes, as Eddie finds Vern with a bullet in his head. Not only that, but the drug has some unexpected side effects to deal with.

Limitless is a great “what if?” story that poses a long series of questions. What if you could unlock your full potential just by popping a pill every day? What would you do with the new abilities you have? Is it worth the risk of negative side effects? How would the people around you respond to the “new you”? Is everything you’re accomplishing really you, or is it the drug? There was a lot of room for failure in a movie like this, but Limitless does it right… for the most part.

There are parts of the film that jump around and may feel confusing, but given the context they’re supposed to be. There may also be several moments in the movie where you find yourself asking, “If he’s so smart, why didn’t he think of doing this or that?” Let’s keep in mind that we’re watching a movie that’s supposed to be exciting. Limitless could have been 30 minutes long, but who wants to watch that? As a result, there are a few areas where things may have been made longer than necessary for the sake of drama. There’s also one subplot that surfaces and quickly feels tossed aside, but by the end of the movie you may not even care; I didn’t.

Bradley Cooper continues to rise in Hollywood, but seeing him back in the days of Jack & Bobby, I knew he had the acting chops to make it big. It certainly doesn’t hurt to have someone as polished as Robert De Niro to play off of either.

Bottom Line: Limitless has a great “what if?” premise and follows through to deliver an exciting thrill-ride.

Acorn and Greg do a little time traveling with Team Avatar as they explore the Gaang’s lost adventures across the Earth Kingdom and Fire Nation. Are...