3 min read
Add comment
FacebookTwitterRedditPinterestEmail
Battle: Los Angeles is not the horrible abomination other critics are making it out to be, but it's certainly nothing new or special either. 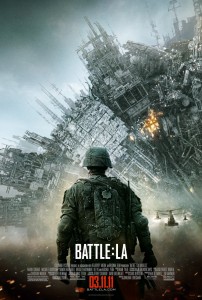 It’s only fair that I begin this review by stating that I’m not a big fan of military or war movies, so I was hoping for the sci-fi element of Battle: Los Angeles to shake things up a bit. The story goes like this: Aliens invade our planet by concealing themselves Trojan horse-style inside meteors which all land nearby major cities across the globe. Their suggested aim is to eliminate the indigenous population of humans and take the planet’s water for their own use. While there are mentions of a war spanning across the globe, the movie focuses on one military unit assigned to search for and rescue any civilians left in an area of Los Angeles.

Unfortunately, the alien element was not played out as well as it could have been. It didn’t even have to be aliens. They could have easily swapped out the enemy for any mass of people or creatures that used different technology, since it was really just about having an enemy that was unfamiliar to us. That being said, the aliens themselves were actually designed fairly well. The weapon integration made it very clear that this is a warrior race with a clear goal in mind, enough to alter their own bodies to accomplish it.

The acting was adequate, but featured a cast that was capable of more, specifically Michael Peña and the lead, Aaron Eckhart. The rest of the cast that compiled the military unit simply weren’t given the time to build enough depth to their characters. Like many war movies, and wisely so, Battle: LA wasn’t afraid to kill off important characters, but also like many war movies, I often wasn’t familiar enough with a particular character when they died, thus taking away any real emotional response to their death. There were, however, two deaths that actually did mean something, so I’ll give credit there.

The biggest flaw with Battle: LA was the unyielding momentum of it all. A well done story is like a roller coaster. It has peaks and valleys as it moves along. An action sequence or a critical moment may occur and heighten your emotions and adrenaline, and then it slows down and allows time for absorption before working up to the next peak. Once the battle started taking place here, there was pretty much only one extended sequence of downtime where the audience was allowed to relax from the constant feeling of paranoia that the rest of the movie offered. This results in a roller coaster that’s always on the way down, and a somewhat uncomfortable viewing experience.

The biggest success of Battle: Los Angeles was its military accuracy. Sure, there were some tiny flaws here and there, and admittedly I’m no expert when it comes to these things, but a close friend of mine with an abundance of military experience couldn’t say enough good things about how faithful the movie was in regards to all things military-related.

Lastly, +2 points for casting Taryn Southern as the reporter on the beach, but -3 for blowing her up. And -5 points for a glaring continuity error involving a pistol near the end.

Bottom Line: Battle: Los Angeles is not the horrible abomination other critics are making it out to be, but it’s certainly nothing new or special either.