3 min read
1 comment
FacebookTwitterRedditPinterestEmail
Unknown is a well-crafted mystery with just the right amount of action mixed in. I doubt you'll figure this one out before it's revealed. 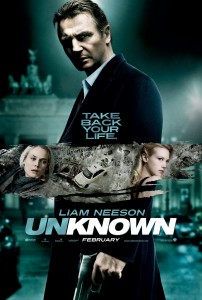 Not to be mistaken for the 2006 mystery drama of the same name, Unknown is the story of Dr. Martin Harris (Neeson). Dr. Harris and his wife Elizabeth (Jones) are visiting Berlin on a business trip, when in a moment of separation, Martin gets into a car accident leaving him in a coma for 4 days. Upon awakening, everything he knew to be true is now in question. Someone else is going around claiming to be Dr. Martin Harris, and he has no way to prove this alleged-impostor wrong. His own wife even denies his identity to his face. It’s as if he never existed in the life that he remembers. Believing his memories to be real and his identity to be true, Dr. Harris seeks out the driver of the taxi that saved his life in the crash (Kruger), as well as enlists the services of a private detective to help put the pieces together.

From the trailers, many people are looking at this as Taken 2, but I assure you it’s not. Yes, there are a decent amount of well-executed action sequences, but these are just the icing on the cake. The real meat of Unknown is the mystery. New details and facts are dropped in quite skillfully in the movie – some to lead us in one direction, while others cast shadows of doubt on what we believed to be true. I’ll admit that while I have a knack for seeing through many movie mysteries, Unknown had me fooled right to the end. The majority of evidence is there if you’re looking for it, but you may not even have considered it as evidence when it originally presented itself.

Aside from a minor plot hole that could most likely be rationalized if necessary, my only issue with this film is the pacing. There are some portions that seem to drag just a tad longer than necessary, but not long enough to cause boredom or pull you out of it. It could have been edited a bit tighter, but then again I could just be nitpicking too much.

All the performances are solid, while Neeson remains the most convincing 58-year-old action star I’ve ever seen. While most of my comments have been a showering of praise, there is a certain “something” lacking from the movie to bring it up to the next level, I just wish a knew what that missing factor was.

Bottom Line: Unknown is a well-crafted mystery with just the right amount of action mixed in. I doubt you’ll figure this one out before it’s revealed.

Acorn and Greg watch as riots erupt in the streets of Capital City! Who is really behind the kidnapping? Will Kiyi ever be able to look at Ursa again...