3 min read
Add comment
FacebookTwitterRedditPinterestEmail
More drama than comedy, The Dilemma will play with your sympathies and get you thinking about how you might act in a similar situation. 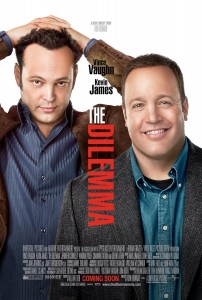 Vince Vaughn and Kevin James have been in pretty bad slumps lately. Vaughn’s last few movies were Couples Retreat, Four Christmases, and Fred Claus. James hasn’t been faring much better, as his recent credits include Grown Ups and the infamous Paul Blart: Mall Cop. Needless to say, I wasn’t expecting much going into The Dilemma. I had forgotten about one small detail though… director Ron Howard. Certainly the man who brought us Apollo 13 and A Beautiful Mind could harness the talents of these two comedic powerhouses and save their careers from continuing to spiral downward, right? Right?

Simply put… yes. Yes he can. While The Dilemma certainly isn’t the caliber of Wedding Crashers, it’s a vast improvement over something like The Break-Up. While I walked in expecting another comedy that was too stupid and disjointed for its own good, I came out delighted to see a film with much more substance.

Simply put, The Dilemma explores what Ronny Valentine (Vaughn) should do when he catches his best friend’s wife (Ryder) having an affair. Does he tell him right away? What about the whole “shoot the messenger” mentality? Should he confront her first? Will revealing the truth emotionally destroy him, resulting in massive ulcers and ruining their chances of landing the dream contract that could make or break their auto design firm? Yeah, that last one’s a bit heavy, but it demonstrates that there’s nothing simple going on here. The audience joins Ronny on quite the emotional roller coaster as he wrestles with all these decisions. While the movie is being advertised as a comedy, it’s strength lies in the drama portion. Jennifer Connelly brings a lot to the table in this regard as the girlfriend of the commitment-phobic Valentine.

Vaughn and James actually have great on-screen chemistry and their life-long friendship comes across as very believable. There are some comedy elements that do work, such as Vaughn’s classic quick-witted ranting, Queen Latifah’s overly sexual metaphors, and Channing Tatum’s unexpectedly sensitive personality. The comedy is sprinkled in just enough to keep things from getting too serious, but as I mentioned already, don’t go expecting to see a raunchy macho-fest. This one has a more complex web to spin.

Bottom Line: More drama than comedy, The Dilemma will play with your sympathies and get you thinking about how you might act in a similar situation.