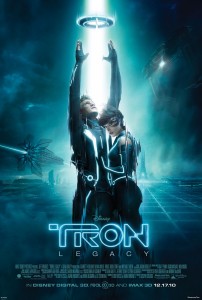 So far, TRON: Legacy has been taking quite the beating among critics. I’m glad to say that I don’t share their ultra-negative views, and I think I know why that attitude has surfaced among so many. The original TRON that was released way back in 1982 is a cult classic, was a ground-breaking film at the time, and holds a special place in many Sci-Fi geeks’ hearts. Any time you’re going to take on something that beloved and innovative, it’s impossible to avoid comparison. So, let’s compare…

Since I was born in 1981 and the original TRON came out in 1982, you can imagine that it’s been awhile since I’ve watched the original. Honestly, I really only remembered bits and pieces, so before seeing Legacy, I started off my day by watching the classic. I don’t know what the big deal is. At the time, the visuals were like nothing that had been seen before on film, so I get that. But honestly, the visuals don’t hold up, so that whole nostalgia and innovation was lost on me. The plot as a whole is fairly mediocre when you really think about it. A wronged employee gets sucked inside a computer and battles an army of villains led by a Master Control Program in order to set the wrong things right and potentially save the technological world. Hmmmm… so it’s another “stop the bad guy from achieving world domination” story.

TRON: Legacy is along the same lines as the original. Clu, a program created by Kevin Flynn to help rebuild and optimize the world left behind after the MCP was destroyed, goes too far and starts building an army to take over the technological world before expanding his reach to our world. This time, Kevin’s son Sam is sucked into the grid where he reunites with his father to battle Clu’s forces and try to escape the digital realm.

While not necessarily innovative in terms of the visuals and 3D effects we’ve seen in recent years, TRON: Legacy is still a masterpiece of special effects. The look of the attire and environment have been updated for the better, making this new version of the grid appear much less barren and lifeless than the original. Fanboys may argue that things were altered too much from the original, but considering how much computer technology has changed in the past 20 years, it’s only logical that the digital realm would evolve far beyond what it once was in that same time-frame.

There are lots of nods to the classic TRON in Legacy, including cleverly-placed items that get a quick full shot or single lines of dialogue that echo the original. I personally thought that enough attention was given to classic references to satisfy the hardcore TRON fanboy, but not being one myself, I suppose I could be wrong. The one point that they glossed over and should have been more accurate with is the laser effect transitioning Sam from the real world to the digital world. It’s an effect that’s still referenced in pop culture today, and taking it away was a poor choice, as fans of the original were certainly expecting it.

As far as performances go, there weren’t any done poorly. The clear stand-out here was Jeff Bridges, who has certainly evolved as an actor over the years since the original TRON. Two of the major characters in the film, Kevin Flynn and Clu, are both portrayed by Bridges with an excellent dichotomy. To separate them even further, the digital effect of portraying Clu as a younger version of Bridges was fantastically executed and much less distracting than I had originally thought it might be. Garrett Hedlund is a worthy son to the iconic Flynn, and Olivia Wilde is charming in the role of Kevin’s surrogate daughter Quorra.

Bottom Line: TRON: Legacy is a well-choreographed action movie that showcases impressive visuals and technology. I don’t know what more people were expecting.