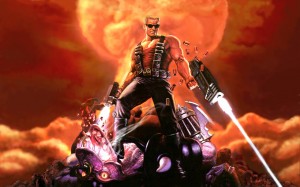 “It’s coming out in 2011,” Gearbox president Randy Pitchford said during a presentation at PAX Prime.

And with that, excitement and skepticism follow. Gearbox Software and 2K Games have taken on the task of completing and releasing Duke Nukem Forever, initially begun by 3D Realms. The project was officially revealed today at PAX during a presentation at the 2K Games booth.

“We’re in the polishing phase now. This is a game where we can not make a promise we can not fulfill,” Pitchford added. “We need to get past the shock and awe, and then we can go to all the retailers and first parties and work out a launch plan.”

Duke Nukem Forever is a sequel to 1996’s Duke Nukem 3D and will feature both single-player and multiplayer modes. “Aliens come and say they’re going to be our friends, and Duke knows this isn’t going to work out,” Pitchford revealed of the plot. “Duke once again is in the pivotal spot and it’s up to him to save the world.”

Below are a couple videos of footage from today’s 2K Games live stream at PAX. While there’s not a ton to see, it’s evidence that this is actually happening. You may refrain from pinching yourself.