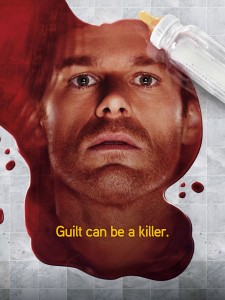 Showtime announced that season 5 of Dexter will premiere on September 26. Here’s the announcement:

Like a category five hurricane bearing down on Miami, the powerful season four finale of SHOWTIME’s Emmy®-nominated series DEXTER, swept over audiences, leaving them in a state of shock and utter disbelief. The episode shattered network ratings records, becoming the most-watched in SHOWTIME history. For their intense and masterful performances, both Michael C. Hall and John Lithgow received Golden Globes® and SAG Awards®. Both actors were nominated for Emmys® this year, with John Lithgow winning the Emmy for Outstanding Guest Actor in a Drama Series.