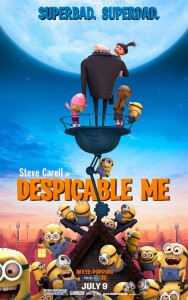 First things first, my intent was NOT to see this movie in 3D. However, as I was using a $10 off coupon only accepted by participating theaters and they were only showing it in 3D, that’s the format I dealt with. The 3D format didn’t necessarily hurt the film, but I can’t imagine it helped all that much either. Only two parts of the film seemed to be made specifically to cater to the 3D, that being a roller coaster segment at an amusement park and an extra comedy bit thrown in during the credits.

That being said, let’s take a look at the movie itself. The Oswald Cobblepot-looking Gru (Carell) is a villain living among the general population. He has no fortress in the side of the volcano; instead it hides below his home. He makes no attempt to hide his villainous vehicle, leaving it parked in his driveway. Right away you can see the tone of the movie. The villains are not so much the world dominating, homicidal creations seen in many movies, but instead “regular” people with a meaner disposition competing with one another to be the best at being the worst. The movie also sets its rules toward violence and consequences as being similar to Looney Tunes when Gru is shot with a collection of missiles and soon after exits a smoking crater stumbling and burnt. It’s nice to see that kind of “fun violence” again.

The story begins to take its turn when Gru adopts three young girls from a corrupt orphanage in order to further his efforts to acquire a shrink ray from his rival, thus allowing him to accomplish his diabolical plan of stealing the moon. Anyone familiar with this premise in movies will instantly see the direction its moving in, but that won’t take away from enjoying it. The adorable youngest girl, Agnes, had me thinking of Boo from Monsters, Inc. Her innocence and cuteness will win you over immediately. 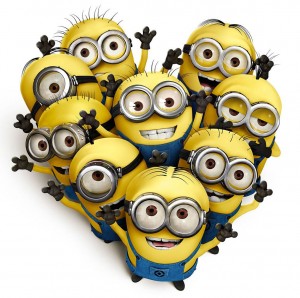 The highlight of the film and a source of endless comedy are the Minions, yellow-pill looking creatures who eagerly follow Gru’s every demand and have a penchant for slapstick comedy and toilet humor. While they may appear to be a creation for use as a mere marketing tool, I’ll admit that I’m sold. Put out some plush dolls or video shorts of the Minions and I can guarantee I’ll be a buyer.

Aside from that, the animation is smooth and well done. My only gripe is that things seemed to develop far too quickly in the relationship between Gru and the girls. While a bit cliche, a montage could have helped provide a sense of development over a longer period of time. It’s a minor complaint in what was a very enjoyable film overall.