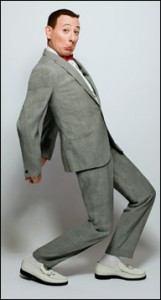 According to Variety, Judd Apatow is planning to revive the Pee-wee Herman film franchise.

Paul Reubens is currently writing a script with Paul Rust (Inglourious Basterds, I Love You, Beth Cooper). Apatow will be producing with no plans to direct. The movie is being described as a road pic built around “a gigantic adventure.”

“Let’s face it, the world needs more Pee-wee Herman,” Apatow told Daily Variety. “I am so excited to be working with Paul Reubens — who is an extraordinary and ground-breaking actor and writer. It’s so great to watch him return with such relevance.”