2 min read
Add comment
FacebookTwitterRedditPinterestEmail
Filming will take place over the fourth quarter of 2010 in Johannesburg. 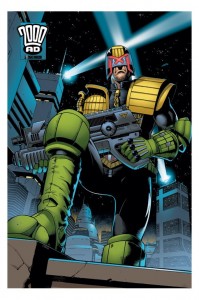 We previously learned that Judge Dredd would be getting the Hollywood reboot treatment. Here you can read the official press statement:

Filming will take place over the fourth quarter of 2010 in Johannesburg.

JUDGE DREDD is being made by the writer/producer partnership behind The Beach, 28 Days Later, 28 Weeks Later, Sunshine, and Never Let Me Go. Alex Garland, Andrew Macdonald and Allon Reich will produce a script written by Garland.

Pete Travis, director of Omagh, Vantage Point, and Endgame will direct. Wagner will be a creative consultant on the film.

Said John Wagner: ‘Alex Garland’s script is faithful to the original concept that made Judge Dredd a favourite bad-ass hero. It’s a high-octane slay ride through the dark underbelly of the vast future city. A fan pleaser. With their track record, I have every faith in Alex Garland, Andrew Macdonald and Allon Reich.’

Said Alex Garland: ‘I grew up reading Judge Dredd. The incredible writers and artists of 2000 AD were formative influences on me. Andrew, Allon and I have developed this adaptation of Judge Dredd with an emphasis on adrenaline and realism, but with all the scale and spectacle of Mega-City One. We think Pete’s propulsive, edgy style is a perfect match for the project.’

The deal was negotiated on behalf of Reliance by IM Global CEO Stuart Ford assisted by attorneys Strook and Strook with DNA principals Macdonald and Reich, DNA head of business affairs Jo Smith, and Miles Ketley of Wiggin & Co. Ford’s IM Global will handle international sales on the project.