1 min read
Add comment
FacebookTwitterRedditPinterestEmail
Marvel Studios has announced that Hugo Weaving has been cast to star as the Red Skull in 'Captain America: The First Avenger'. 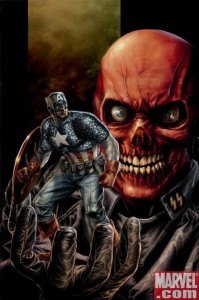 Marvel Studios has announced that Hugo Weaving has been cast to star as Johann Schmidt aka the Red Skull in the studio’s highly anticipated movie Captain America: The First Avenger opposite Chris Evans and Hayley Atwell. In the early comics, Johann Schmidt was drafted into loyal service of The Third Reich and renamed “The Red Skull.” The character will be updated for the feature adaptation. Joe Johnston will direct the film penned by Christopher Markus & Stephen McFeely.

Weaving was last seen in The Wolfman and his voice is very recognizable as Megatron from Transformers and Transformers: Revenge of the Fallen as well as Noah the Elder from Happy Feet. His other film credits include starring in V For Vendetta, The Matrix franchise, and The Lord of the Rings trilogy.