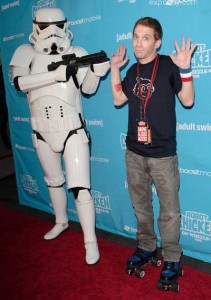 Lucasfilm Animation is currently developing an all-new animated Star Wars series, focusing its efforts on the comedic aspects of the “galaxy far, far away.” Featuring creative involvement from Seth Green and Matthew Senreich, creators and executive producers of the Emmy and Annie Award-winning Robot Chicken, as well as writing from The Daily Show‘s Brendan Hay, the series will look at the Saga’s characters with a playful and irreverent tone. The series will be produced by Daytime Emmy and Gemini Award-winner Jennifer Hill (The Backyardigans), and directed by Emmy-nominated Todd Grimes (Back at the Barnyard).

“There are so many stories taking place in the Star Wars universe, and they don’t all have to focus on the fate of the galaxy,” said Grimes. “We’re looking at Star Wars from a new perspective; this will be a glimpse at how the rest of the galaxy is affected by the events of the Saga. There’s a lot of humor to be mined from that.”

“The Star Wars universe is so dense and rich; it’s crazy to think that there aren’t normal, mundane everyday problems in a world so well-defined,” said Green. “And it’s even crazier to think of what those problems might be, since it’s all set in a galaxy far, far away. What do these characters do when they’re not overthrowing Empires?”

Said Senreich, “We’re going to pull back the curtain of some of those behind-the-scenes shenanigans. It’s going to appeal to all ages, the way Star Wars should — but there’ll be plenty buried under the surface, as well. As Obi-Wan might say, ‘it all depends on your point of view’.”