4 min read
1 comment
FacebookTwitterRedditPinterestEmail
It's not the superhero spoof you were expecting...it's so much more. 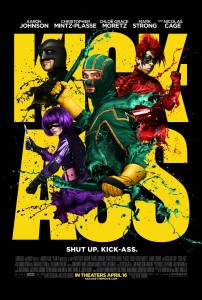 Dave Lizewski (Johnson) is an “invisible” high school student. His day-to-day life is underwhelming. He lives alone with his father and spends the majority of his time hanging out at a comic store with his buds. The pivotal point in his life is when he asks the simple question, “Why hasn’t anyone tried to be a superhero?” From here, Dave decides to buy himself a scuba suit and answer that very question by creating his alternate persona…Kick-Ass.

The film is based on a comic book series of the same name from author Mark Millar, who has also had a hand in The Ultimates, Marvel Zombies, and the recent Civil War story arc in Marvel Comics. While I haven’t read the series myself, I’m told that the film adaptation is a nice translation which holds onto the core of the comic books.

It’s within this translation that we stumble upon my first, and possibly only, gripe with Kick-Ass. Being a huge fan of Batman and all things in the respective Bat-universe, I was very upset to see such a blatant rip-off of the Batman costume being worn by Big Daddy. While other costumes in the film are at least close to their comic book counterparts, Big Daddy is nowhere near close. What we get instead is imagery of a Batman-looking character blowing people away with a variety of firearms. This upsets me for two reasons: 1) Batman doesn’t kill. 2) Batman doesn’t use guns. I don’t know if the filmmakers were trying to piggyback on the success of the recent Bat-films by creating this parody costume, but I for one am not a fan of that decision. Not only does it use Batman’s likeness in an inappropriate way, but it takes away from the originality of the character, as the audience will constantly be thinking “Batman” while looking at Big Daddy.

That said, there really isn’t much else to complain about with Kick-Ass. I think most people saw the previews and went in expecting a superhero comedy spoof, but that’s not what they’ll be getting. The movie straddles the line between spoof and superhero fantasy. At times, we’re looking at the goofy side with Kick-Ass himself and Red Mist. At other times, we have a more traditional superhero narrative going on with Big Daddy and Hit Girl. It’s the blurring of this line that makes the movie so intriguing.

The characters were very fleshed out. There were many times during the movie where my heart was racing as I feared what their fate might be. The action sequences are fantastic. While bordering on ridiculous at times, the film sets a tone and stays with it the whole way through. The clear stand-out here is Hit Girl, played by Chloe Moretz. Her performance is so spot on that you’ll actually believe an 11-year old girl is capable of that mentality and ability. There are lots of critics and naysayers out there complaining about the treatment of Hit Girl in the film. She’s crude, incredibly foul-mouthed, extremely violent while showing little remorse, and receives her fair share of abuse as well. The critics claim that this is inappropriate and will send bad messages to a younger audience. I’m sorry critics, but in case you didn’t notice, the movie’s rated-R. A younger audience shouldn’t be seeing this. It’s called personal and parental responsibility. The same kind of responsibility people should have been showing instead of bringing their children to see South Park: BL&U just because it was a cartoon. Did Hit Girl’s role in the film make me feel uncomfortable at times? You’re damn right it did, and that’s what the movie wanted you to feel. Huh, look at that…art making people feel emotions…what a concept.

Bottom Line: It’s not the superhero spoof you were expecting…it’s so much more.

Katie hadn't seen The Rock, but now she has. Hear her thoughts in this episode.