4 min read
Add comment
FacebookTwitterRedditPinterestEmail
I highly recommend this game for any of my fellow Warhammer 40k fans, or for people who are fans of small unit tactics/RTS style games. 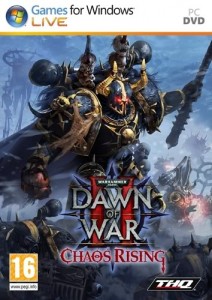 I’m a huge Warhammer 40k fan. I have been painting minis and doing off and on table top gaming for several years now. When Dawn of War first came out, I thought it was awesome. I have always been a fan of RTS games, and bringing some of my favorite table top lore with impressive graphics and play styles definitely helped cement THQ and Relic Entertainment as some quality game developers.

When Dawn of War II came out, it drastically changed the way the game was played. The graphics, engine and overall game play was completely different. Instead of controlling a large battle group, you commanded a small hand picked assault force consisting of up to 4 squads: your Commander, a Tactical squad (basic fire team), Devastator Squad (heavy weapons), Assault Squad (close combat, fast attack specialists), Scout Squad (lightweight, maneuverable and infiltrators) and even a mighty Dreadnought.

In Dawn of War II THQ and Relic introduced the Tyrannid Swarm to the 40K gaming universe. Your group of Blood Raven Space Marines were tasked in driving back the swarm, and saving your recruiting worlds of Sub-Sector Aurelia. The plot line was good, there were some descent cut scenes, and the availability of customizing your squads with experience points let you have some pretty good replay value. But since the story line was locked in place, it didn’t take long to get bored.

Dawn of War II – Chaos Rising has your Commander returning to Sub-Sector Aurelia to investigate the appearance of planet Aurelia from the Warp. Plant Aurelia was the crown jewel of the sector, and thousands of years ago the planet was gripped in the maddening clutches of a Warp Storm, eventually pulling the planet and all its inhabitants into the foul Warp. The Warp is where the Chaos gods dwell, where demons roam free and where a man’s sanity is as easily lost as a snow flake on a hot bolter barrel. Aurelia was seized in the clutches of the Warp for thousands of years, until now. Just as easily as the Warp Storm took your planet, it spit it back out: barren, covered in thick ice and snow, and seemingly lifeless…until a Blood Raven distress beacon was activated on the surface.

Dawn of War II – Chaos Rising picks up several years after the ending of the Tyrannid Swarm. Now you must use all new wargear and squad abilities to recon this distress beacon, and keep your wits about you brother, for the sweet stench of Chaos lurks in every shadow.

I highly recommend this game for any of my fellow Warhammer 40k fans, or for people who are fans of small unit tactics/RTS style games. DoW II: Chaos Rising has great replayability (Co-Op mode and Last Stand) by keeping your Blood Ravens pure in the eyes of the Emperor, or ravening mad from the corruption of Chaos artifacts.

Brian is a retired member of the US Army, a full time student for Graphic Design, a non profit volunteer for Veteran Training, a mentor for disabled veterans in STRIDE Adaptive Sports and one hell of a geek. He plays a lot of video games, mostly on the PC, and enjoys movies, table top gaming, lego building and just going out and having a good time.