The House of the Devil – review

4 min read
Add comment
FacebookTwitterRedditPinterestEmail
Good if you are into creepy anticipation; not so good if you're the type that can't sit still. 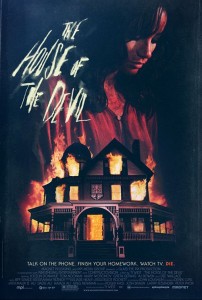 I’m not a big horror fan; I like my horror movies as I like pornography…DISTURBING!! I am kidding, but for real, it’s easy to do blood and gore, but it’s hard to make me stay awake all night wondering if my bed is going to start shaking. The House of the Devil came out in late 2009 and I was tempted to see it because it looks as if it was completely filmed in the early 1980s and re-released in 2009. Not the case. Director Ti West wanted the look of the era where many people believed there were Satanic Cults all around America. I have to give the film its credit with this retro look as everything is convincing of the times.

Lets get to it then. The film stars a young no name actress, Jocelin Donahue, as the main character Samantha. She’s a college student who apparently hates her living condition and is looking for an apartment to stay in rather than split a dorm with her skanky loser roommate. Samantha winds up scoring a good deal on an apartment but now she’s concerned on how she can start paying the rent because she has no job. Checking over the bulletin board on campus for job postings she sees a white piece of paper that says “Baby $itter Needed” and some tabs with a phone number to call (our plot is moving.. a little). After we listen to some old 80s tunes we’re on the way to check this house out with Samantha and her friend that is giving her the ride. (Side thought: How the hell did we do anything back then? Seriously, we’re spoiled. This film takes place in the early 1980s and there were no: cellphones, GPS, computers, etc. but they somehow find their way to this house in the country a few miles from campus…) Samantha and her friend make a deal; if these people are creepy they bounce. They’re more than creepy as it turns out the couple living in the house don’t have a child at all. They want her to stay in the house because of his elderly mother upstairs. Samantha’s friend tells her this is stupid, they lied, get the hell out of here. Samantha stays however since she is now offered $400 for 4 hours instead of $100 and she needs the money for her new place. OK, we’ll buy it. Her friend leaves, the couple who own the house leave, and Samantha is here in this big old house all alone with some elderly woman upstairs in a bedroom she is told doesn’t need to be bothered. Yeah, this is where if it were me I’d be staying with a shotgun and $4,000. The entire talk of this night on the news is that there’s a perfect lunar eclipse about to take place… spooky.

The film set this great setting and it convinced me a little of why she stayed, I went along with it, but here is where the film got stale. The anticipation was good and kept me on edge, but it was also slow. I think I was expecting more of a progressive pace along the lines of The Exorcist. What was needed were another thirty minutes to the movie. Samantha starts to find pictures of a younger couple in the house with a kid that were all recent pictures, none of which are the older couple she met that evening. She is hearing noises throughout the house with no response from this mother in bed upstairs.

Suddenly the film takes a much faster pace all too quick, as if they were running out of time and needed to get to an ending. The movie now becomes a slasher film but with some creepy makeup effects on the “mother” we discover (similar to the girl in The Exorcist). I liked the build of the movie, although very slow, I just didn’t enjoy how the end was shoved in there very fast. If you are into creepy anticipation style scary movies then rent this, but skip it if you’re the type that can’t sit still (the slow pace will be torture for you) or gets wigged out by “based on true events” horror movies.