[gravatar email=”robv@thegeekgeneration.com” align=”left” size=”40″ border=”2″] Editor’s note: Although Timm is our resident Lewis Carroll expert and has posted his review, we accept all points of view at The Geek Generation, so here’s Doug’s review of Alice in Wonderland. 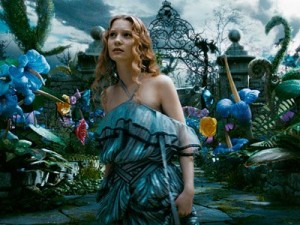 Alice’s Adventures in Wonderland and Through the Looking Glass operate with the sort of dream logic that finds one event following another without much in the way of cause. The books are given perfunctory plots involving Alice traveling from an arbitrary Point A to an equally arbitrary Point B. The wisp of a blot is nothing more than a frame from which author Lewis Carroll can hang a  series of nonsensical vignettes filled with wordplay, malapropisms, logical extremes and poems, poems, poems.

The books began as an improvised tale for a trio of young girls, and while Carroll no doubt conceived the basic framework of the story, the intricacies of the language almost certainly came later. The language is what makes the books so special, which makes it frustrating that most filmmakers choose to shunt the language to the side in favor of visual spectacle. Of the adaptations I’ve seen, only the version of Through the Looking Glass starring Kate Beckinsale as Alice has had the good sense to slow down and enjoy the language.

A decade and a half ago, Tim Burton was the guy who’d made Pee-Wee’s Big Adventure, Beetlejuice, Edward Scissorhands, Batman, and Batman Returns and who knew how to use his unique visual style and production design to serve the story he was telling. The latter-day Burton is a parody of his younger self; his movies look like the results of an overeager film student assigned to make something in the style of Tim Burton. The garish colors, loud noises, and PG-13 grotesques are spectacle without any underlying substance.

In Burton’s adaptation, Alice is a willful young Victorian lady with all these crazy ideas about how women can totally do stuff men can and just looking pretty and getting married isn’t really that important. In the film’s framing story, Burton clubs the audience over the head with how wacky and unconventional Alice is in contrast to how stuffy everyone else is.  Dudes, she’s totally a Dharma stuck in a Greg world! Mia Wasikowska, who plays Alice, does a fine job with the material she’s given, but here the character is woefully underwritten. The literary Alice is defined by her curiosity and willingness to accept the reality of everything around her. The film casts Alice as a dour unbeliever who has been cast in the role of reluctant savior.

As an adaptation, this film has to be considered an utter failure. The characters all have the same names and physical characteristics of their literary counterparts, but that’s where the resemblance ends. Screenwriter Linda Woolverton takes a very generic fantasy adventure plot – the evil Red Queen has usurped the good White Queen and only Alice can defeat the dreaded Jabberwocky to make everything right again – and simply assigns characters from the books the roles of various fantasy-adventure archetypes. Her concession to the source material is to artlessly shoehorn quotations from the books in a stab at credibility that misses wildly.

This isn’t to say that the film is completely without its virtues. The performances across the board are a lot of fun – Johnny Depp plays the Mad Hatter with his signature loopy charm, Helena Bonham Carter’s gleefully scenery-chewing turn as the Red Queen is a delight, and Crispin Glover brings his usual twitchy creepiness to the role of Stain. The only sub-par performance is turned in by the usually reliable Anne Hathaway, who for some reason holds her hands and sways her body as though she was dancing throughout every one of her scenes.

Additionally, as much as I complain about style over substance in Burton’s recent work and Alice adaptations in general, the movie really is a treat to look at (especially in IMAX 3-D). There’s no reason that the images Burton created couldn’t serve a more straightforward adaptation of the source material, but apparently that undertaking would have been too mundane.

When considered as a fantasy-adventure film, Alice in Wonderland is inoffensive enough, which is why I didn’t grade it as low as some of my remarks might imply. The film doesn’t add anything new, and a lot of the situations and character dynamics are the sort of cliches that elicit eye rolls rather than anger. At the height of his powers, Burton could have turned in a first-rate straightforward Alice adaptation. What we’re left with is pretty pictures and dull storytelling.