Why Did I Rent This? G.I. Joe: The Rise of Cobra

If you’re me (which I am), sometimes there are movies that no matter how bad they look, or how bad people have told you they are, I just can’t resist seeing. With Netflix, these movies are easier to avoid, because you can add them to your queue, have second thoughts, and remove them. Walking around an old brick-and-mortar video store though, they’re harder to resist, so you end up taking them to the register and bringing them home before you have a chance to reason yourself out of them.

Which is how I ended up watching G.I. Joe: The Rise of Cobra. It looked bad. People told me it was bad. And yet, there I was, taking it off the shelf and putting it into my DVD player.

The worst part about it is that my rationale for renting G.I. Joe: The Rise of Cobra was the same as when I saw the first live-action Transformers movie a couple years ago. It looked terrible, but I kept thinking that my nostalgia for the source material would at least make it palatable. I don’t remember if Transformers pulled out any “more than meets the eye” or “robots in disguise” business, but when “a real American hero” (groan) and “knowing is half the battle” (double groan) cropped up early in this one, I knew I was in trouble.

Like the live-action Transformers movie, G.I. Joe: The Rise of Cobra wastes a lot of time doling out a lot of mythology that isn’t very compelling. The key to making dense mythologies work is to invest the audience in the characters first, then dive into the back story. I mean, who cares that Darth Vader is Luke Skywalker’s father if you don’t care about the characters? The fact that Duke, Baroness and “The Doctor” (Cobra Commander, but they don’t call him that until the end) have a complicated history, and that Snake Eyes and Storm Shadow have been rivals since childhood never really hits because the characters are just so dull.

Part of this has to be laid at the feet of the actors. Channing Tatum (Duke) and Sienna Miller (Baroness) aren’t accepting little gold statues anytime soon. I think Joseph Gordon-Levitt has the chance to be the actor of his generation, but behind the makeup and voice distortion, any semblance of a real performance disappears.

Despite some dubious career decisions, I actually think very highly of Marlon Wayans, but other than being the sass-talking black guy who (predictably) saves-the-day-at-the-last-possible-second-when-nobody-ever-believed-in-him, he doesn’t rise above the material. Christopher Eccleston is another favorite, but he’s basically asked to play a Roger Moore-era Bond villain. 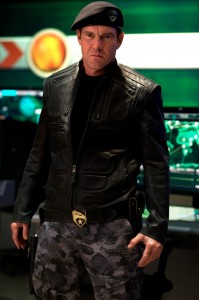 The most egregious mistake the filmmakers made was the complete misuse of Dennis Quaid. The Quaid is nothing less than a force of sheer masculine nature who deserves the reverence the Internet usually reserves for Chuck Norris. His inclusion in the movie puts a strain on the credulity of multiple plot points.

First of all, if The Quaid was in charge of G.I. Joe, there would be no need to recruit additional members. The Quaid could single-handedly take on whatever ninjas, terrorists, mad scientists, pirates, vikings, alien invaders, or Sith Lords that could possibly be a threat to world peace.

Second, a plot point towards the end of the movie involves The Quaid’s operation being temporarily shut down by a bunch of bureaucrats. The Quaid answers to no one.

The Quaid disappears for much of the movie when he is incapacitated after being impaled through the chest. At one point, he is even shown in a wheelchair. Of all the aspects of the movie involving The Quaid, this is the least credible – impaling him through the chest is not enough to take him out of the action.

To return to an earlier theme,  like the live-action Transformers movie, this flick involves a ridiculously esoteric weapon that can’t possibly fall into the wrong hands only it does and “Oh, no!” There are chases. There are explosions. It’s boring.

In fact, that’s my biggest criticism of the movie – it’s just boring. When people are running around shooting at each other with terribly space age weapons, I should at least want to stop folding laundry for a minute and just sit down and watch the movie, right? G.I. Joe: The Rise of Cobra didn’t even pass that test.

Director Stephen Sommers made his name with The Mummy, which was a fun, pulpy movie that didn’t take itself too seriously and in Brendan Frasier, at least gave the audience a hero that was worth rooting for. Since then, he’s made clunkers like Van Helsing and now this. His touch for making dopey action fun has abandoned him, leaving lots of dopey action and no fun.