LOST: A Quick and Dirty Primer

8 min read
Add comment
FacebookTwitterRedditPinterestEmail
Get the low-down on what's gone down in the first 5 seasons of LOST.

Originally, I was going to summarize the first five seasons of LOST at the beginning of my review of last night’s two-part season premiere. As the article evolved, I realized that it would take about as long to read as it would to watch every episode of the show, so I broke it into two parts. Also, ABC devoted the hour before the new episodes to those seasons, so a separate article makes sense.. 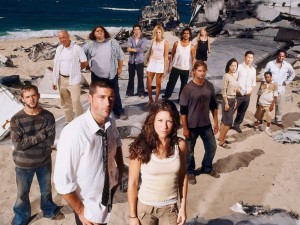 If you haven’t watched LOST before, the most recent (and final) season isn’t the place to start. It’s a mythology-rich, heavily serialized show which doesn’t lend itself to casual viewing.  It isn’t as tightly serialized as some other serialized shows from the last decade – think The Wire and Mad Men – but it resists casual viewing the way that the Law & Order and CSI franchises don’t.

If you haven’t seen it, let’s just say that LOST is a lot like Gilligan’s Island. To start with, there’s a group of castaways on a deserted island. Also, lots of crazy stuff  that you wouldn’t expect in normal life happens. On Gilligan’s Island, there’s the Harlem Globetrotters; on LOST, there’s a smoke monster, hostile natives, and mysterious research stations. So LOST definitely brings the crazy on a level that Gilligan’s Island never approached, though it is possible that by the time it’s all over, the Harlem Globetrotters will be used to explain all the crazy.

The first season devotes itself to the castaway premise, like Gilligan’s Island. Season 1 chiefly occupies itself with island survival and the survivors’ efforts to escape the island.  Each episode is split between the events on the island and flashbacks which provide insight into the past of the survivors.

The show kicks off with the crash of Oceanic flight 815 (not a three hour boat tour) on an uncharted island. Through the extensive use of flashbacks, we get key insights into the pasts of the survivors. There’s Jack (a doctor with father issues), Kate (a woman with murder issues), Locke (a paraplegic with life issues), Sawyer (a con man with revenge issues), Charlie (a musician with drug issues), Hurley (a fat guy with lottery issues), Sayid (an Iraqi with torture issues), Claire (an Australian with pregnancy issues), Jin and Sun (a Korean couple with marriage issues), Michael and Walt (an estranged father and son with father and son issues), and Boone and Shannon (step-siblings with quasi-incest issues). Through these flashbacks, a planeload (pun SO intended) of connections between the characters are revealed, but other than enhancing the show by giving viewers hours of spot-that-coincidence fun, none of it actually has amounted to anything yet.

Like Twin Peaks, the show starts piling on mystery upon mystery. There’s the aforementioned smoke monster, the implied presence of mysterious (and possibly hostile) island natives, and an inexplicable metal hatch in the middle of the jungle. 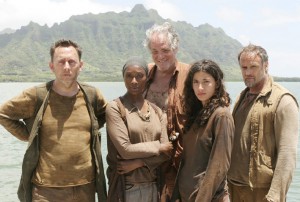 The season ends with the survivors building a raft (sadly without a coconut radio) and four of them attempting to leave the island. They’re foiled in this effort by the hostile natives (or “Others”, if you’re in the cool kid club). As the thrilling season finale ends, Michael, Jin, and Sawyer are bobbing in the ocean, as Walt is kidnapped by the others.

As the episode ends, we hear Michael cry, “Waaaaaaaalt!”

Unfortunately, that plaintive cry ends up summing up most of the second season, alternating with, “I just want my son back!” as Michael’s most frequent exclamation. When Walt, Sawyer, and Jin wash up on the island, they’re all the way on the other side where they encounter additional survivors.

The “Tailies” as these survivors are popularly called (cuz they were in the tail section of the plane, duh) join up with the established characters and make their way to the other side of the island. 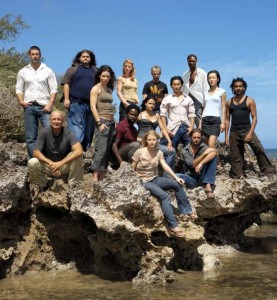 By the end of Season 2, the creative team on LOST had essentially written themselves into a corner. There were a bunch of mysteries (the smoke monster was introduced in the series premiere and still hasn’t been fully explained going into Season 6), particularly what had happened to Walt while he was held captive by the Others, and the show wasn’t really in a position to explain what was going on. It didn’t help that the actor who played 10 year-old Walt had experienced a huge growth spurt so keeping him on the show was problematic at best.

So the LOST writers reacted to writing themselves into a corner by burning down the house. Season 3 prominently featured the Others, which was great and all, but in terms of flashbacking and providing insights into the characters, the show was pretty much treading water. I mean, that episode where Kate was married was awesome cuz I mean, Mal Reynolds, but other than that it didn’t actually advance anything.

The Season 3 series finale raised the game. Through a series of flashforwards (Whoa – and that’s a Keanu Reeves in The Matrix “Whoa”, not a Joey Lawrence on Blossom “Whoa”) we learn that some of the castaways have gotten off the island. What’s more, we see the boat that is presumably going to take everyone off the island… 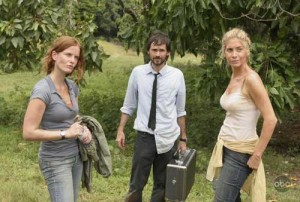 …which brings us to Season 4.  Ah, Season 4 – kind of a lost opportunity (the writers’ strike forced the season to be somewhat condensed) – but this is where they really brought the crazy. There are a lot of off-island flashforwards, and the “Freighties” (the dudes and dudettes from the ship that ostensibly takes the castaways off the island) join the castaways for more island adventure fun. Even as we watch the characters drawing closer to getting off the island, their future counterparts are focused on finding a way back.

Season 5 finds the core group of characters unstuck in time (I choose Kurt Vonnegut’s terminology in Slaughterhouse 5 rather than time travel because there’s no Delorean involved). Most of the action takes place in the 1970s, and there’s lots of discussion about what they can and can’t do to change the future. “Whatever happened, happened,” is the season’s mantra – meaning that no matter what they do (say, shooting someone) won’t affect the outcome. In other words, Marty McFly isn’t going to turn his dad from a loser into a winner. Which is too bad, because what if Sawyer and Juliet had gotten off the island and invested in Microsoft? Would Sawyer have wound up like Biff in Back to the Future II? And wouldn’t you watch that? Hold on – to the LOST fan fiction site!

So after hours of people discussing how they can’t change the future, they decide that maybe they can, by detonating a hydrogen bomb – which I guess is way more intense than bringing a book that gives you sports outcomes through time – they maybe-possibly-we’ll-see what-happens change the future.

Which brings us to last night’s premiere. I left out a bunch of stuff in this summary, but you should get the gist. In preparation for last night’s premiere, I watched all five seasons over the past month. The show mostly hangs together as a piece of long-form storytelling, but it’s hard to care about Boone and Shannon episodes (appearing nightly at dinner clubs everywhere, Ian Somerhandler and Maggie Grace in, “Hey everybody, we were on the first season of LOST!) or the Walt and Michael business (to date, a huge dead end) or the Tailies (which again, never led anywhere).

Of course, there’s still time to reincorporate these lost elements (again, pun SO intended) but the show has evolved so much from the original survival tale that some of these mysteries might be best left behind.

I’m writing this all before the season premiere airs, so there might be some elements I gave short shrift to (and I ignored a lot of characters who were introduced over the years) but I wanted to provide a basic foundation at the outset. As Season 6 unfolds, I’ll add some supplemental articles to fill in the gaps.