Webb Will Take a Crack at Spider-Man

1 min read
Add comment
FacebookTwitterRedditPinterestEmail
Sony has confirmed that Marc Webb will be taking the directing helm on the Spider-Man reboot. 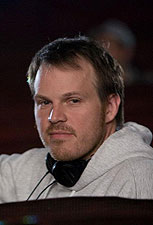 Sony has confirmed that Marc Webb, who’s responsible for the recent hit (500) Days of Summer, will be taking the directing helm on the Spider-Man reboot.

Webb said, “This is a dream come true and I couldn’t be more aware of the challenge, responsibility, or opportunity. Sam Raimi’s virtuoso rendering of Spider-Man is a humbling precedent to follow and build upon. The first three films are beloved for good reason. But I think the Spider-Man mythology transcends not only generations but directors as well. I am signing on not to ‘take over’ from Sam. That would be impossible. Not to mention arrogant. I’m here because there’s an opportunity for ideas, stories, and histories that will add a new dimension, canvas, and creative voice to Spider-Man.”

Now that that’s out of the way, it’s time to start thinking about who should be filling the Spidey suit. Having recently worked with Webb and because he’s one of the best young actors in the industry today, I nominate Joseph Gordon-Levitt. Who would you like to see??