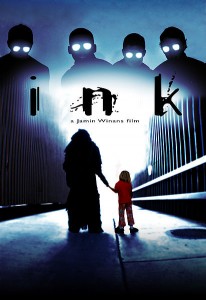 If there’s one genre within the genre of indie films that is rarely ever produced it’s that of sci-fi/comic book story telling. The obvious reason is that more often than not special effects are always involved, as are elements such as make-up, set design, and costume design. These elements added up equal a higher budget for production which indie films don’t necessarily have; such as the 2009 title Ink. Double Edge Films produced Ink on a very low budget while also placing Ink into this comic book genre of indie film. It seems the odds would be against it.
I’m going to cut straight to it; Ink is by far one of the best made independent films I have ever seen, no, it is THE best independent film I have ever seen. Director, writer, and composer of Ink, Jamin Winans, somehow makes it work. It all flows and comes together with what he has; it’s like watching a Neil Gaiman graphic novel. The background story is about two “dream factions”, the people who come in the middle of the night that give you good dreams and the ones who come to give you nightmares. The story revolves around a little girl that is kidnapped by an unknown entity called “Ink”, a dark hooded figure with a very big nose and ugly face. The girl’s physical body is left behind and induced into a life threatening coma. They soon discover there’s a missing link with this young girl and her father, and while two sides are split to retrieve the girl and the other to retrieve her father, a much bigger picture comes into play that joins into an epic ending of storytelling masterpiece.

What really moves the story and gives aesthetic breath to Ink is its powerful and well composed musical score. It helps you feel the situations and characters, proving why a good soundtrack is so important to any film wanting to achieve dramatic impact. The blurry visual effects I figured were an unconscious “look” to the movie, but I soon realized it felt the director was using this as symbolism to the idea of blurring reality from dreams. There are times where you don’t know what is a dream and what is real, yet every scene is an important piece to the puzzle. The acting was surprisingly quite good, especially Søren Kelly (also known as Chris Kelly) that plays the role of John, the father.

There are some things I did not like or wish they did differently in Ink, such as the frequently dubbed voice-overs they do that come out awkward in a few scenes. There’s this one character that is a blind musician with very cool powers but here and there is awkward with some of the stuff he says. I guess comic relief comes dressed as annoying. The first 30 minutes of the movie seem a bit cheesy at times because of this, but because the rest of the film captured me under its spell this becomes insignificant.

If you can put aside the fact that Ink was made with a low budget and expect that some scenes aren’t top notch Hollywood special effects, then I highly suggest you watch it. And after you watch it, you might just feel like I do and wish they had a larger budget to make something that has a better plot, story, and creative engine behind it than 95% of the crap Hollywood spews out for millions of dollars more.